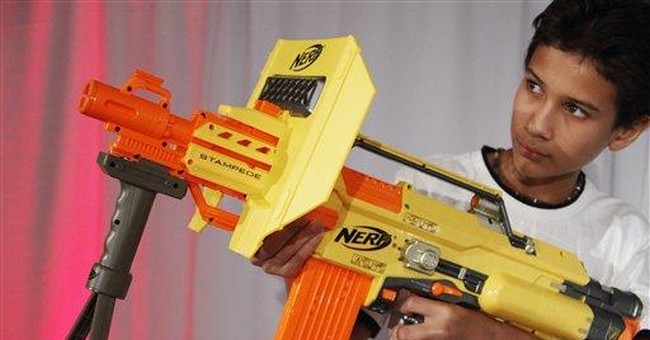 All over the nation, children are telling Santa what they want for Christmas. Some are writing letters or sending emails. Most, however, are visiting the malls to see Santa, same as many of us did as children. Remember the wonder of sitting in Santa’s lap, telling him what you wanted for Christmas, positive that you were talking to The Big Guy (and I’m not talking about Joe Biden here) and that your Christmas wish would come true.

That’s what young Michael DeCarlo did, only for the mall Santa to take a great big dump on his wishes.

Well, what the mall Santa denied the young boy, someone else has delivered. It seems the NRA has an interest in all types of guns these days.

A mall Santa refused Michael DeCarlo’s request for a Nerf gun for Christmas, so now the National Rifle Association is stepping in to help the 4-year-old expand his toy arsenal.

The gun rights group released a video of Santa delivering a sack of the popular toys to the child’s home in Illinois as part of their “mission to make Michael’s Christmas the best ever.”

“Mean Santa won’t be happy I have this,” DeCarlo says in the clip before emerging victorious in a Nerf battle with this more generous – and sunglasses-wearing – version of St. Nick.

Mall Santa didn’t want to give Michael a Nerf gun for Christmas and made him cry.

The @NRA made it our mission to fix this and make Michael’s Christmas the best EVER. pic.twitter.com/wpGAzcpqAs

Hasbro, the company that owns the Nerf brand, also said it sent DeCarlo “a care package of our latest Nerf blasters just in time for the holidays.”

“I am so grateful for all of the people who reached out and sent Nerf guns to Michael. Americans of all backgrounds came together and rallied for my son,” the boy’s mother, Sabella, later says in the NRA’s video, which doubles as an advertisement for the organization. “We have received hundreds of Nerf guns and Michael will be distributing those to other little patriots in need.”

This is what makes Christmas so wonderful, in my opinion. It brings people together, even as some people like the “mean Santa” try to tear us apart.

I mean, it’s a toy. It’s not a mall Santa’s job to tell a kid that he can’t bring anything, especially considering the insane things kids often ask for. Does this Santa say no to requests for ponies? Probably not, so why tell a kid no on a Nerf gun?

The NRA stepped up, as did a lot of other people, for one simple reason: Because this anti-gun insanity has got to stop.

Toy guns aren’t real guns. Let’s stop pretending that they are, or that they lead children to become violent or anything of the sort. They don’t. Honestly, some people need to get the hell over themselves and recognize that a kid wants a toy and there’s absolutely nothing wrong with that. Let them have fun. Let them be kids, for crying out loud.

Good on the NRA for stepping up. I don’t care if they used the video as a commercial. Considering the scrutiny they’re under right now, they probably had to in order to justify the expenditure.

Regardless, it was the right move for them and for Hasbro.