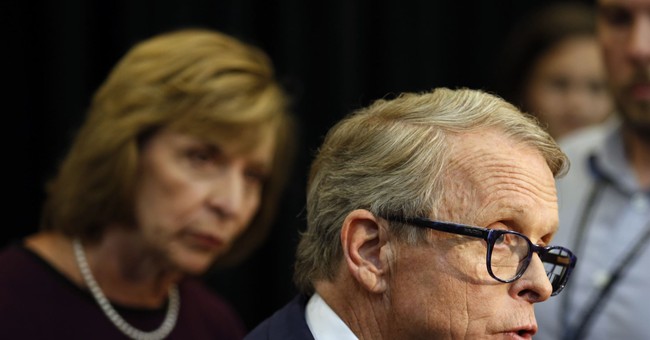 Ohio Governor Mike DeWine has been trying to walk a tightrope. On the one hand, he’s wanted to pass new gun control measures, but on the other, he doesn’t want to alienate his pro-gun base.

Frankly, he hasn’t done a great job of either.

Now, though, that tightrope walk is about to be tested.

A controversial “stand your ground” gun rights bill is heading to Gov. Mike DeWine, a Greene County Republican who promised to push through gun reforms after the mass shooting in Dayton’s Oregon District.

The Ohio House voted 51-31 late Thursday in favor of the measure. The Ohio Senate voted 18-11 on Friday. Four Republicans, including state Sen. Peggy Lehner of Kettering, joined Democrats voting against the bill.

Under current law, Ohioans have a “duty to retreat” from danger in public places before using deadly force in defense of themselves or others. Senate Bill 175 would remove that duty.

“Stand Your Ground” is opposed by many county prosecutors and police chiefs, including Dayton Police Chief Richard Biehl, who said it would make communities less safe and encourage armed vigilantism.

Which is BS. It’s done no such thing where it’s been enacted, but are we surprised that political entities like police chiefs are towing the party line on these laws?

It doesn’t mean the crap they’re spouting has any validity.

The big question is just what will happen when the bill hits DeWine’s desk.

While he’s been trying to walk the aforementioned tightrope, the truth of the matter is that now, he has to pick a side. If he sides with the anti-gunners who vehemently oppose these regulations, then he’s offering a middle finger to pro-gun voices within his state – the very same pro-gun voices he’s going to likely need come re-election time.

So, what will DeWine do?

Frankly, I’d be surprised if DeWine signs it.

Ideally, he’d sign it and not blink in the least. However, DeWine has been taking an anti-gun approach ever since Dayton. While it’s clear he isn’t giving the anti-gun crowd everything they want, he’s been beating the anti-gun drum enough that it’s clear he’s leaning in their direction. Signing this would run completely counter to that, especially as DeWine has said not to send this bill to him without his anti-gun measures as well.

Lawmakers did no such thing, remembering their role in a divided government is to create laws, not rubber-stamp the executive branch’s preferred measures. They’re the ones charged with introducing and passing laws.

However, the flip side is that DeWine’s job is to sign or veto bills, which does give him the authority to kill this one.

As noted, though, once he does, he’s formally picked a side. While the most vehemently pro-Second Amendment voices already see him as an anti-gun Republican, a veto here would expand the number who see him that way significantly. Don’t be surprised to see DeWine primaried and potentially lose.

The pro-gun crowd is important if Republicans are going to have a shot in hell of winning. DeWine is going to have to determine whether or not he’s willing to alienate his base to appease people who weren’t going to vote for him anyway.