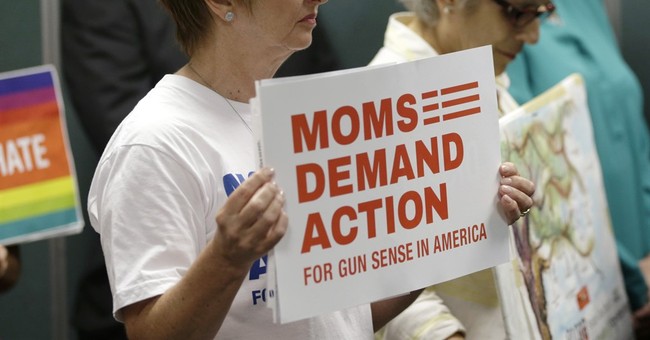 In Arkansas, the state is doing what most other states are doing right about now. It’s trying to figure out how to keep itself from having a horrible tragedy like Parkland or Santa Fe, TX.

I can’t blame it. Contrary to what some people claim, no one wants to see dead kids. We all want our children to be safe and sound while they’re at school, and while school shootings aren’t even close to the top of things most likely to claim a child’s life, it’s still something we’re all concerned about.

But in Arkansas, there’s one group that feels like they’re being excluded from the debate, and it’s not the pro-gun crowd.

Nearly two dozen members of the group Moms Demand Action, which advocates for more gun laws, attended a three-hour legislative committee meeting in Little Rock on Monday only to be told they would not be allowed to comment.

“I was very upset, but not terribly shocked,” said Eve Jorgensen, head of the Arkansas chapter of Moms Demand Action.

Jorgensen said members of her group attended the meeting on Monday to give input on ways to make schools more secure.

“We knew they were going to only have pro-gun presentations, all about arming teachers and so we wanted to have a chance to push back and offer some different solutions,” Jorgensen explained.

The committee heard presentation from three pro-gun advocates. Jorgensen said two members of her group had signed up to speak at the end of the meeting.

“They said, well we’re out of time, you’ll have to come back and get on the agenda if you want to be guaranteed time to speak,” Jorgensen said.

In defense of the lawmakers, there hasn’t been any public comment period where Moms Demand Action would be allowed to speak. These were all invited guests and were described as experts. Moms Demand Action isn’t anything of the sort.

Frankly, though, they probably should be excluded from the debate. I mean, they have a right to speak and all that, but other than that, they bring nothing to the table except hysteria and fearmongering.

No matter what the topic, if members of Moms Demand Action want to speak, everyone involved already knows what they’re going to say. They’ll go on and on about how guns are bad and how we all need to get rid of them so we can hold hands, sing Kumbaya, and the world will be just perfect. They’ll ignore the mountains of data that show disarming the innocent only empowers the lawless.

As I said, we know what they’re going to say.

But we’ve already seen what gun free zones do for schools. Parkland and Santa Fe were both “protected” by a gun free zone. So were Newtown and numerous other schools that fell victim to tragedy. I think we can safely say at this point that “gun free zone” doesn’t really dissuade those inclined toward evil. Let’s just call that a hunch.

Because of that, Moms Demand Action not getting special permission to speak to lawmakers doesn’t phase me in the least. If they want to be invited to the Big Boy Table, maybe they should learn how to not sound like a broken record, and offer some real solutions that don’t violate the rights of ordinary Americans. You know, just to shake things up.