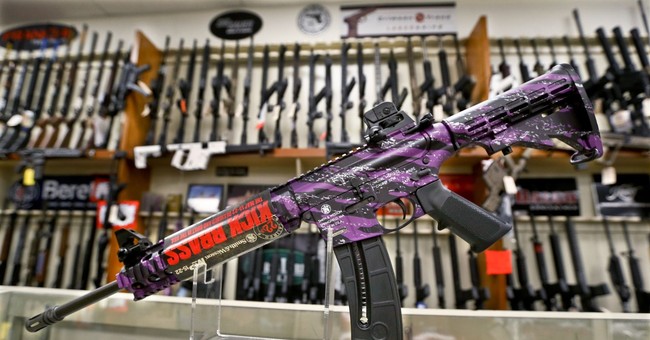 In a lot of the country, saying you want any form of gun control is a nonstarter for a political campaign. For example, if you’re running in most parts of Texas or the South, it’s probably not wise to talk about banning any firearm.

However, some might think that New York, of all places, would be the one place where you wouldn’t have to worry too much. However, it seems that, for one Democrat, she is worried about admitting she supports an assault weapon ban.

A Democratic congressional candidate in New York state said she supports a ban on some firearms, but admitted that she will never say so in public out of fear of losing the election.

“When I was at this thing today, it was the first table I was at, a woman said, ‘How do you feel about assault rifles?’ And I said they should be banned,” Tedra Cobb is heard telling a group of teens in a video posted Monday, the Washington Free Beacon reported.

“And I said, you know, people were getting up to go, to go get their lunch because it was a buffet, and I just said to her, ‘I want you to know, Cindy, I cannot say that,” Cobb added.

The candidate, who’s running against Republican incumbent Elise Stefanik in New York’s 21st Congressional District, in the northernmost part of the state, was rebuked by others for her silence on the issue in the public.

Cobb explained that she cannot publicly come out in support of a gun ban as that will doom her election chances.

“And she said, ‘Well, I want you to,’ and I said, ‘I won’t win,'” Cobb said. “I said Moms Demand [Action] says, and Tricia Pleau [member of the gun-control group Moms Demand Action] said, ‘Do not say that you want an assault rifle ban because you will not win.'”

Cobb does come out and support some gun control, namely universal background checks and bump stock bans. Both of those have support even among people who consider themselves fairly pro-gun, so that’s a somewhat safe position to be in.

Unfortunately for her, the truth is out now. Everyone knows that not-so-deep down inside, she’s nothing but a gun grabber who thinks banning an extremely popular class of firearms is somehow beneficial. If knowledge of that position will doom her campaign, then she better make plans for another job come January, that’s all I can say.

The thing is, this is how politics works, especially with guns. It’s part of the reason some of us won’t support candidates that even hint at being anti-gun with things like bump stock bans or universal background checks. Far too often, their positions are a more palatable veneer which covers who they truly are. They know they won’t get elected if they come right out and say they favor banning things like modern sporting rifles, so they hide that truth.

But they can’t bring themselves to pretend to be a Second Amendment absolutist. They can’t say they’re pro-gun, in part because their base would reject that, so they try and find a middle ground.

So many of us will only support candidates that express an absolutist line. We don’t need candidates who will say they favor only limited gun control only to want something far more radical.

TAPES: We Investigated a Suburban LGBTQ Pedophile Ring. Here's What We Found.
Townhall
Elon Musk has just 1 question for The AP after they called 'the' a dehumanizing label and BAHAHA
Twitchy
Activist Eliza Bleu Cancels Creators, Appears to Ramp up Twitter Censorship
Redstate
BREAKING: Riots Break Out in Memphis, Other Cities as Police Release Tyre Nichols Video
PJ Media