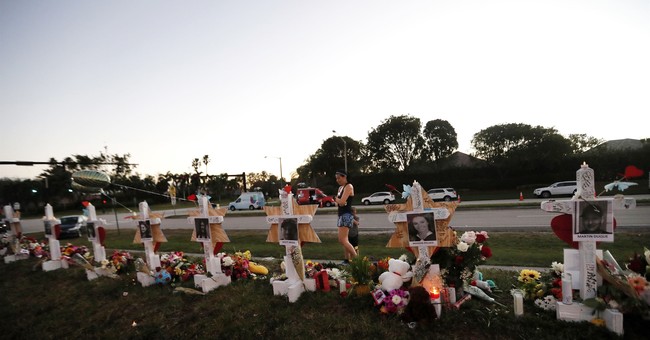 As we’ve repeatedly seen, what happened at Marjory Stoneman Douglas High School in Parkland, Florida was a complete and total failure of local government. The school system dropped the ball on the eventual killer, and so did the sheriff’s office. For all the talk of guns from the Parkland kids, it was their government–the people they seem to trust completely with firearms, I might add, while trying to disarm the rest of us–that screwed up so royally.

Now, a group of survivors wants to make those entities pay. Literally.

More than a dozen students who survived the mass shooting at Marjory Stoneman Douglas High School have filed a civil rights lawsuit alleging that numerous officials failed to stop the Valentine’s Day massacre at their school.

According to the suit, Runcie and Israel were “both well aware of the potential danger [suspect Nikolas Cruz] posed to the school and its students and faculty, yet they did nothing meaningful to enhance security from this known threat.”

Plaintiffs claim that Peterson, Jordan and Medina’s actions and inactions during the course of their response to the shooting directly led to the death, injury and traumatizing of children, and they blame the county for a lack of training and preventative policies that could have stopped the shooting.

“Numerous failures by numerous government actors, including law enforcement, strongly continued to Shooter’s ability to [carry out] this horrific attack, without which this attack could not have happened,” the plaintiffs allege.

I’m sympathetic, but this is doomed from the start.

The government has no legal duty to protect anyone. The courts have ruled that way more than once. While I may blast Peterson for being a coward, something I’ll continue to do, the truth is that legally, he didn’t have to do anything.

Now, do I agree with it? Not really. I’d love to see a ruling come down that if you’re going to require citizens to be disarmed in certain areas and therefore give up their means to self-defense, you are then responsible for protecting those individuals. That would be absolutely perfect.

Unfortunately, I think we all know that we’re not that lucky.

Instead, I expect these folks to lose this lawsuit despite the complete and total failures that led to the attack. Courts love to follow legal precedence, so I think this group of survivors will be disappointed, unfortunately.

At least this crowd seems to be focused on people who actually screwed up in some way leading to the attack, not millions of law-abiding gun owners who probably still can’t be bothered to know where to find Parkland on a map.

Hat tip: The Truth About Guns.