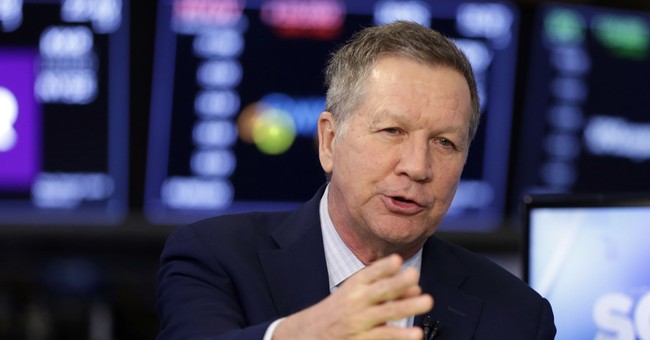 You see, the good governor is frustrated. Why? Well, it seems he’s frustrated that lawmakers who were elected at least in part on being pro-gun are acting like pro-gun politicians.

Gov. John Kasich is sounding off on the lack of movement on gun regulations that he’d proposed earlier this year, commenting on it in two separate public events.

Kasich talked mostly foreign policy and the NATO summit at the National Press Club in Washington, but he did note his frustration about a package of gun law changes that he hoped Republican state lawmakers back home would take up. “I have a legislature that refuses to consider common sense gun bills,” Kasich said.

You’re damn right they refuse to consider “common sense gun bills.” Part of that is common sense doesn’t play any part of it.

For example, he’s talking about expanding the list of prohibited persons in Ohio to include people who historically have no history of being a risk to people. Further, there’s no mechanism to restore anyone’s right to keep and bear arms, a fundamental violation of those people’s civil liberties.

The lack of common sense is Kasich believing that Republican lawmakers in his state, as members of a party closely associated with pro-gun positions, would suddenly ignore the fact that they were pro-gun to advance his nonsense agenda.

Further, the extreme risk protection orders he’s trying to push through may sound good, but he needs to understand that there’s concern. Some people think that those who own guns are a risk all on the surface. Giving them a mechanism to strip us of our guns is something that he, as someone who swore to support and defend the Constitution of the United States as well as Ohio’s should be concerned about. There’s a reason people have trepidation on this topic.

What I do know is that gun owners are sick of being told to give up their rights when the failure isn’t theirs.

The most spectacular thing that happened in Parkland, Florida was how completely the government screwed up. At almost every level, they botched the handling of the Parkland killer, and now 17 people are dead. Why should we expect an extreme risk protection order to actually have made a difference? After all, it sure as hell sounds like the local government had ample reason to act and didn’t. Why should we expect the courts to have made a difference?

Gov. John Kasich wanted to be president, but right now he’s illustrating exactly why America is better off without him in the Oval Office.

Afghanistan and the Collapse of Normals’ Faith in the System
Townhall
So First Lady Jill Biden is not a fashion doctor and the internet has noticed, let the pouncing commence
Twitchy
Report: Surprising Private Message Trump Sent to Merrick Garland After Mar-a-Lago Raid Revealed
Redstate
Yes, They're Going to Arrest Donald Trump. Deal With It.
PJ Media