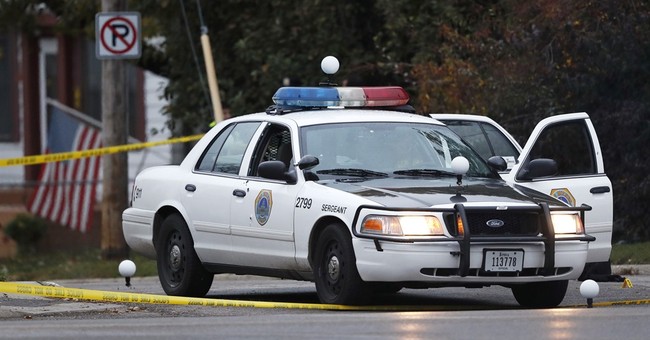 What is it about family that makes it so you can be absolutely convinced that despite them engaging in a criminal act, they’re still somehow angels?

I ask because it seems that no matter what the circumstances, when someone gets shot, the family will invariably step up and pontificate on just why that person shouldn’t have been killed.

In this case, a man killed in an Iowa store burglary is as pure as the driven snow or something. Well, maybe not. The family at least admits he was in the wrong for stealing, but they still think he shouldn’t be dead.

Police said that business owner 67-year-old Thomas Kraft, of Des Moines, discovered the burglary when he arrived at the store and found a pickup truck loaded with his merchandise.

There was still broken glass and a broken door at the scene Wednesday night. Kraft was taken to a hospital for an unrelated medical issue.

“There’d been some forced entry into the business, and there was a pickup truck parked in the service bay that had been loaded with property,” Des Moines police Sgt. Paul Parizek said.

Haarstad’s sister, who spoke on the condition that KCCI not use her name, said he suffered from drug addiction and should not have burglarized the Des Moines store.

She also said Kraft had been wrong in taking the situation into his own hands and shooting her brother.

“He doesn’t have a history of violence,” Haarstad’s sister said in a telephone interview with KCCI from the family’s Minnesota home.

Because Kraft would have known that the moment he confronted a man with an addiction to drugs and a propensity for taking other people’s stuff (sarcasm).

The sister is convinced that Kraft walked into the business with the intent to kill her brother.

“If you know somebody is in there and you walk in armed, and you shoot them in the head, that is absolutely premeditated,” she argued.

Of course, she’s wrong. Kraft has a right to be on that property, Haarstad didn’t. We still don’t know precisely what happened inside that building as the police are still investigating. They’re not calling it a “Stand Your Ground” case just yet, but they haven’t ruled it out. The reason is that contrary to what Haarstad’s sister may think, just entering your store doesn’t mean you intend on killing someone.

But a family has a weird way of ignoring reality when they want to. They can’t fathom the possibility that their drug-addicted loved one may have been confronted and decided to get violent. They can’t fathom anything other than their loved one is dead and someone has to be held responsible.

Years ago, I reported on a local case where the police shot a suspect. Almost immediately, the family started screaming that their loved one didn’t have to be dead. Couldn’t the police have just shot to wound them?

I wrote my column that week on just why “shooting to wound” is not just a television thing, but colossally stupid. The truth of the matter is that those who were screaming didn’t want to listen to reason.

With Haarstad’s family, the same is true. The investigation is ongoing, so we’ll have to wait and see how it turns out, but in the meantime, I’m not worried what the family of someone we know was engaged in illegal activities thinks. She’s probably not the best judge of what happened.

The Case Against Ron DeSantis 2024
Townhall
James Woods ZINGS Alyssa Milano for her Elon Musk dunk turned Volkswagen GAFFE as only he can and LOL
Twitchy
James Woods and Elon Musk Have Some More Fun With Alyssa Milano Turning in Her Tesla
Redstate
LOL! Monica Lewinsky's Twitter Poll Doesn't Go Down the Way She Hoped
PJ Media