Why Doctors Need To Mind Their Own Business On Guns 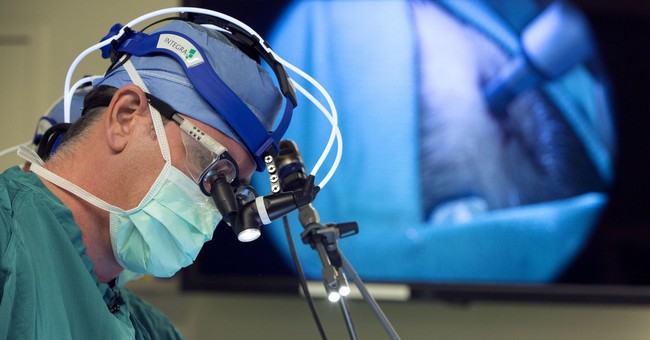 I’ve mentioned before that I’m somewhat surprised at the idea of a drawing a battle line between gun owners and doctors. There’s no reason we should be opponents, but we are, and that won’t change anytime soon.

However, it seems some see these lines as natural. For example, an attorney writing for Harvard’s website seems to think that doctors should be permitted to speak to their patients about guns–a matter I tend to agree with. I don’t like the government telling people what they can’t say or who they can’t say it to–but that they probably should talk about them.

Though the ruling technically applies only within the Eleventh Circuit, the decision (which Florida wisely declined to appeal to the U.S. Supreme Court) had social and legal ramifications far beyond that region. The message was clear: physicians have a right to talk to their patients about firearms. The next logical step is to ask whether they actually have a duty to do so.

Firearms violence killed more than 36,000 people in 2015, twice as many as brain cancer killed, and slightly more than motor vehicle incidents killed. Of those 36,000 deaths due to firearms, 22,000—a full 61 percent—were suicides. About 13,000 (36 percent) were homicides and the remaining 1,000 (3 percent) were due to unintentional incidents. Firearms also accounted for more than 67,000 additional non-fatal injuries, though that number may be a significant underestimate, given that nonfatal gun violence is much trickier to measure than deaths.

Physicians represent not only the front lines of treating gun violence, but also of preventing it in the first place.

The presence of a gun in the home is one of the most important risk factors for suicide, homicide, and unintentional injury. Inquiring and counseling about the presence of firearms, the storage of firearms, and the handling of firearms constitutes a simple, cost-effective, and potentially very impactful way for physicians to assist in reducing the number of firearm injuries and deaths. In fact, many professional associations encourage these questions. But no articulated duty for physicians to ask about or talk to their patients about firearms exists in current statutory or case law.

The author brings up the case of a suicidal individual as evidence of when a physician may need to talk about guns, and I’m fine with that. For example, if one of my kids was feeling that way and his or her doctor was talking to me about it and mentioned the need to make sure guns–as well as any other weapon, to be sure–are out of reach, that would be fine. That’s a prime example of a doctor doing it right.

Where things break down, however, is the idea that guns in my home are the business of anyone other than me and my family. The statistics claiming that having a gun in the home will raise your risk of being shot has been debunked countless times in countless places. It’s not true. The sheer number of law-abiding gun owners in this country who have never been injured, nor has anyone in their family, is a testament to this fact.

The truth of the matter is that doctors need to understand that whether or not I own a gun isn’t any of their business. A pediatrician mentioning safe storage of firearms in passing without inquiring whether I own a gun or not is fine, but interrogating me to find out if I have a firearm so I can be lectured about the dangers of said firearm isn’t. Frankly, if a doctor did that to me, I’d walk out of his office right then, but many won’t. They view doctors as authorities and will meekly accept whatever the doctor says.

And since doctors can be as full of it as anyone, that’s not always good.

When it comes to guns, physicians need to remember that some things are none of their business.

TAPES: We Investigated a Suburban LGBTQ Pedophile Ring. Here's What We Found.
Townhall
Elon Musk has just 1 question for The AP after they called 'the' a dehumanizing label and BAHAHA
Twitchy
Activist Eliza Bleu Cancels Creators, Appears to Ramp up Twitter Censorship
Redstate
BREAKING: Riots Break Out in Memphis, Other Cities as Police Release Tyre Nichols Video
PJ Media