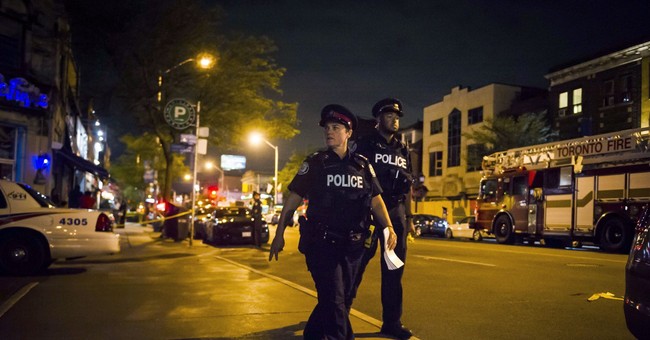 Ever since Parkland, gun control zealots have been screaming bloody murder that mass shootings only happen here in the United States, that this is a uniquely American thing. Before someone tries to claim otherwise, I’ve heard them use those exact words more than once. They believe that a lack of gun control is the reason these things happen, and the proof is how it doesn’t happen elsewhere.

Well, the 14 people shot yesterday in Toronto would beg to disagree about it not happening outside of the U.S.

A black-clad gunman opened fire in a busy neighborhood of Toronto on Sunday night, killing at least one person and wounding 13 others before being fatally shot in an “exchange of gunfire” with police, authorities said.

The motive for the shootings was not immediately clear, and the identity of the suspected gunman has not been made public. But Toronto Police Chief Mark Saunders said it was not a random act and terrorism had not been ruled out.

Video posted on the Internet included the sounds of gunshots echoing off the buildings in an area of restaurants and shops known as Greektown.

“We have a young lady that is deceased right now,” Saunders said. “And we have a young girl, I believe 8 or 9 years old, that is in critical condition.” He said the other shooting victims are currently being treated.

The gunfire erupted around 10 p.m. Sunday near Danforth and Logan avenues east of downtown in the Danforth neighborhood, police tweeted. Saunders described the stretch of roadway as “one of the busiest streets in the country.”

At this time, we’re not sure what kind of weapon the gunman used. All we know is that the loss of life is far less than it could have been.

For the record, Canada has a gun culture, but they also have some fairly strict gun control. In fact, almost everything being talked about here in the United States is already law in Canada.

What good did any of that do?

At this point, we don’t know much about the shooter here. We don’t know his motives nor what he used or where he got it from. Things are still kind of shaky information-wise as I write this.

I’m quite sure that some nimrod will look at the fact that so many were injured and not killed as proof of gun control laws working somehow. Anyone who does that is an idiot. The only reason so many are wounded instead of killed is because the shooter didn’t make killing shots. Period. The laws of man won’t stop a bullet that’s left a gun.

But you know what the law did manage to do in Toronto?

It managed to make damn sure that there were no armed private citizens on the streets to respond to the threat. The only gun present appears to have been the madman who decided to shoot up his fellow man for sport. Funny how that works out, isn’t it? The one person who intended to break the law anywhere also ignored the Canadian laws against carrying a gun.

Elon Musk Tweeted a Meme About CNN...Then They Melted Down
Townhall
Elon Musk's info on what will soon be 'published on Twitter itself' explains the Left/Dem freakouts
Twitchy
Apple Threatens to Remove Twitter From Its App Store, Sets up Major Battle
Redstate
The Babylon Bee Publishes a Hysterical Spoof of a College English Course Description. Oh, Wait!
PJ Media