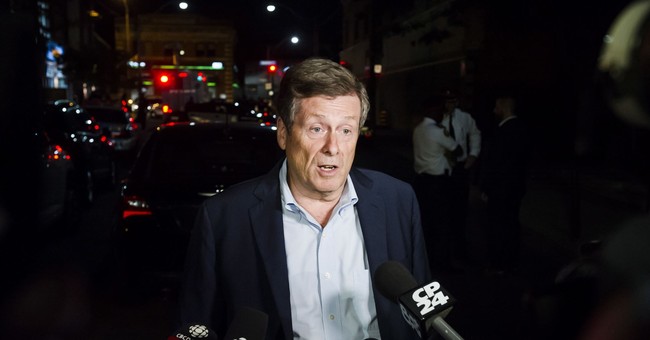 The mayor of Toronto is understandably upset. I find it hard to believe that anyone in his situation wouldn’t be. A mass shooting, more than a dozen injured, people killed…it’s upsetting.

But that doesn’t excuse him talking nonsense.

Toronto Mayor John Tory made an impassioned statement to his City Council on Monday following the deadly shooting in a popular Toronto neighborhood the night before.

“You’ve heard me ask the question of why anybody would need to buy 10 or 20 guns, which they can lawfully do under the present laws,” Tory continued. “And that leads to another question we need to discuss: Why does anyone in this city need to have a gun at all?”

Tory said in his call for a gun control debate following the deadly shooting in the city’s Greektown the night before that even if the discussion could prevent just “one of these incidents,” in his view, “it is a discussion worth having and having very soon.”

There’s no concealed carry, no pistols with short barrels for carrying concealed, magazine restrictions of five rounds for rifles, ten rounds for handguns, and weapon registration.

In other words, Canada is pretty much what most American gun control activists want more than anything, and look what happened. There was yet another killing in Toronto, this time by a man with a gun. It’s almost like magazine restrictions and registration doesn’t actually stop bad people from doing bad things.

The fact is, Toronto has, in just this year, given us prime examples of just why gun control is a complete and utter failure. One attack illustrated what happens when someone wants to kill a lot of people without using a gun, and another showing how a mass shooting can still take place even with gun control in place.

Meanwhile, what does Tory want to focus on? The ability to buy multiple guns.

At this point, do we even know what kind of guns were used, how he obtained them, or much of anything? It seems the killer had some major mental health problems in the past. I’m not talking about being on anti-depressants either. His own parents described him as “psychotic.” Do we know how he got a gun in Canada in the first place? Canada, like Illinois, licenses people to purchase firearms first. How did he get his gun?

Tory, like most anti-gun politicians, doesn’t seem to care. What he does care about is that now he has an excuse to try an push an anti-gun agenda even further.

The thing is, if laws designed to prevent people from shooting other people in the first place aren’t going to work, what makes him think cracking down on the gun rights of ordinary Canadians will?