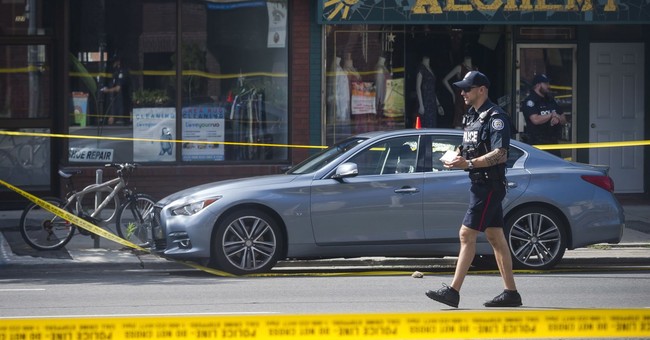 The shooting in Toronto over the weekend has been illuminating for a number of reasons. Not only have we seen how almost every provision currently being discussed won’t stop mass shootings, but we’ve seen that no matter what laws are on the books, anti-gunners will continue to push for more in the wake of these attacks.

The kicker is that it now appears the gun may have been illegal in the first place.

A confidential police source told CBC News the firearm has been traced to the United States, and that [he] may have taken it from his comatose brother, who has alleged ties with a street gang.

Now, I won’t get into guns from the U.S. going into Canada. For one thing, I think the numbers are probably overstated. Canadian criminals can steal guns from Canadian homes as easily, if not more so, than getting them from the U.S.

Further, it’s already illegal for Canadians to buy American guns. What else are we going to do?

But despite this information, that the gun was probably illegal from the start, that the anti-gun mayor of Toronto still wants to ban handgun sales in the city? The killer, in this case, didn’t walk into a Toronto gun shop, follow all the steps required, wait the waiting period, and then take possession of his weapon, only to then turn it against innocent people.

No, he apparently took it from his comatose, (alleged) gang-banger brother who had probably gotten it illegally in the first place.

In other words, the laws already on the books couldn’t do anything to stop this mass shooting because the killer went around all of them to get it in the first place.

That means the issue is a problem for Canadian law enforcement, not lawmakers.

The thing is, just like in the U.S., gun grabbers don’t care about stopping mass shootings. Oh, they think they do, but if they did, why try to ban legal handgun sales in the city when it appears there was no legal sale taking place anywhere along the way?

It’s illuminating in that it shows people precisely what our future holds if we give ground now.

I’ve said before that it’ll never be enough for them, and this is proof. Anti-gunners will keep nibbling away at people’s gun rights until they get the complete disarmament they want.

For Toronto’s mayor, what transpired on his streets was a gift. Why else would he push for more gun laws if the gun was obtained illegally in the first place?

Maybe it’s because it’s never really been about human life, but about this warped idea that private citizens shouldn’t be armed.

Here in the U.S., we at least have the Second Amendment to fall back on. For our pro-gun brothers and sisters in other countries, they don’t have that luxury. There’s nothing to protect their rights, and that’s a shame.

And because of that, it’s even easier for the gun grabbers.

But for us here in the U.S., we can at least look and take heed of the truth. For anti-gunners, it’s never enough.

Trio Of Fort Campbell Soldiers Charged With Running Guns To Chicago
May 12, 2021 9:30 AM ET

Trump Rains Down Hellfire on Liz Cheney After Her Ousting
Townhall
Dana Loesch calls out Liz Cheney for her 'weird focus' while things are going to hell
Twitchy
The Inflation Numbers Are out and We Are in Trouble
Redstate
The Morning Briefing: Everything Is Fine—Biden Naps While World Falls Apart
PJ Media