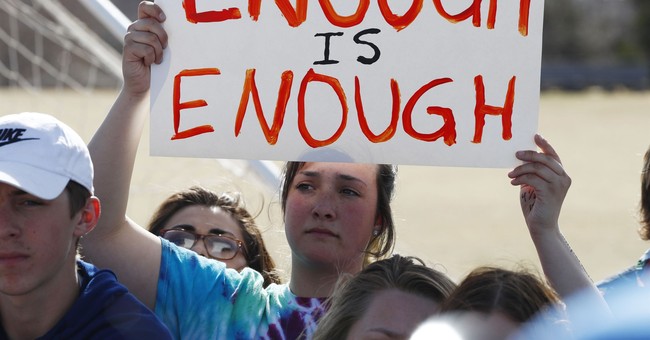 For some time, smart Democrats have been arguing that it’s not a good idea to come out in favor of gun control, especially in ordinarily pro-gun states. While the issue might be a winner in New York City, Boston, or Los Angeles, it’s not that great an idea in rural Oklahoma, Texas, or South Carolina.

However, a new poll is being used to urge Democratic candidates to do just that.

Up to this point, Democrats have been decidedly defensive on guns. The most famous instances of Democratic candidates using guns in television ads include West Virginia Sen. Joe Manchin III shooting the so-called cap-and-trade bill, former Georgia Rep. John Barrow talking about his granddaddy’s pistol and Missouri Senate candidate Jason Kander assembling a rifle blindfolded. The ads were meant to reassure voters that Democrats didn’t want to take away their guns.

In the wake of a steady stream of mass shootings, some Democratic candidates are talking more openly about guns, but to base voters in the context of competitive Democratic primares.

But this poll is a little different.

It modeled three different base Democratic messages against a standard conservative message. The first base message talked about the economy, education and health care. The second base message included those same issues along with a “moderate” gun message, including protecting the Second Amendment and universal background checks, and “keeping guns out of dangerous hands.” The third base message included the same initial issues along with a more progressive gun message that combined a commitment to an assault weapons ban with a call for fewer guns and making them harder to get.

The first option prevailed over a conservative candidate message by 13 points, 50 percent to 37 percent. The second message won by a wider 17-point margin. The third message, which included the more progressive position on guns, triumphed by the widest margin, 22 points. None of the ballot tests included party affiliation for the candidates.

The sample makeup was 47 percent Democrats, 38 percent Republicans, and 15 percent independents. But the bigger takeaway is who was influenced.

While the breakdown is interesting and slightly troubling, there’s no mention of geography.

An NYC Republican is far more likely to support gun control than one in Georgia, for example, and thus the locations of these respondents actually matter.

Further, as the above report noted, one of the issues tends to be questions of how important gun control is to the average voter. While this poll is supposedly different, it’s really not. It presents a boilerplate pro-gun message against a shifting anti-gun message and assumes that the pro-gun message either can’t or won’t change. That’s not true.

An argument of “keeping guns out of dangerous hands” is the kind of rhetoric that offers great soundbites and little substance. It’s also nebulous enough that a pro-gun individual would hear that and might think it means “enforce existing gun laws,” thus be in favor of it while an anti-gunner would hear it and think of things like assault weapon bans, universal background checks, and any number of other things.

This nebulous nothing would demand to be clarified, then the attacks would begin. At that point, the landscape changes and all bets are off. No longer is the phrase a Rorschach test, it’s a defined policy position that people will pick apart.

An additional issue is that while it compared different messages, it still doesn’t address how deep that interest goes. Oh, people who hear the argument may well have loved it, but how important is gun control to that individual in the grand scheme of things? We know from other polls that gun control isn’t a big winner as far as issues go. This changes none of that.

So if Democrats want to keep sniping on about gun control, be my guest. It won’t help their chances in November, though.

What Mitch McConnell Said About the FBI's Raid on Mar-a-Lago Is Quite Disappointing
Townhall
Sebastian Gorka drops powerful video about what the FBI raid on Mar-A-Lago means for all Americans
Twitchy
Trump Attorneys Spill the Beans on Issues With FBI Raid, Warrant
Redstate
We've Got the Deep State on the Run. Here's What Needs to Happen Next.
PJ Media