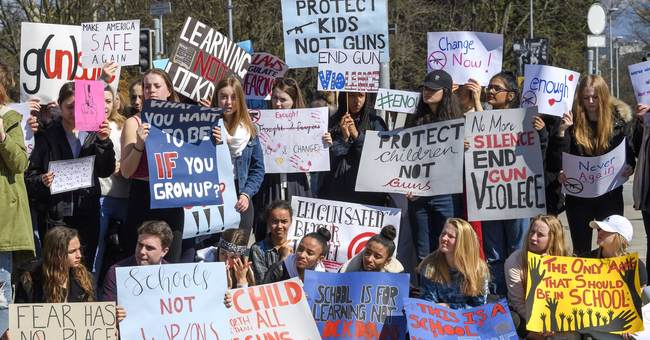 A Colorado anti-gun student group has withdrawn its support from an anti-gun rally due to alleged death threats. Meanwhile, others are saying the anti-gun rally will go on as planned.

However, there’s some humorous stuff in this, let me tell you.

Denver’s March on the NRA protest organized by students is still planned for Saturday afternoon despite a group of young activists pulling out because of violent threats they received.

The local gun-control advocacy group Students Demand Action pulled their affiliation with the protest Wednesday night after a Tuesday night discussion about how to handle online violent threats the teens were receiving.

Ethan Somers, an 18-year-old activist from Evergreen, wanted to assure the community that the protest will continue.

“Every time we plan to stand up for students there is always a group or someone who thinks it is OK to threaten innocent lives,” Somers wrote in a statement. “There were talks of what do we do for all scenarios and one was to cancel the march/rally, however we will not be bullied into fear.”

Um…your entire position on guns is because you were “bullied into fear.”

That said, I don’t blame them for ignoring death threats and holding the rally anyway. While I disagree vehemently with their cause, I can respect them moving forward despite any threats they may have received.

I’m more than a little skeptical about the threats, though. After all, it wouldn’t be the first time someone on that side of the political aisle faked a threat in order to score points and sympathy.

On the same hand, this week especially, I’m not willing to dismiss it entirely either. After all, I know the kind of nastiness I’ve received just this week from people who disagreed with me on something relating to the Second Amendment, and I’m on the same side. I can only imagine the kind of nastiness some anti-gunners get, so are death threats possible? Sure, and anyone who does such a thing is scum and a poor example of the pro-gun community.

But to say they’re not being bullied by fear is ridiculous. After all, look at so many of the arguments being bandied about by anti-gunners. Not only is their position predicated on fear, but they seek to sway people by bullying people by fear. Why else claim that opposing an assault weapon ban means supporting slaughtered children? Why else present it as a choice between your rights or your children?

I can respect pushing through threats to hold your ground, even if I disagree with your ground. What I can’t respect is the blatant hypocrisy of saying you can’t be bullied into fear while everything you’re trying to accomplish is being done by trying to bully people into fear.

Canadian Pastor Dragged Off by SWAT Team Out on Bail Has a Warning for Americans
Townhall
CDC director: 'We now have science that has really just evolved'
Twitchy
Megyn Kelly's 9-Word Beatdown of Maddow's 'Maskless People' Meltdown Is Beautiful
Redstate
UPDATED: Don Lemon Pranked Us All
PJ Media