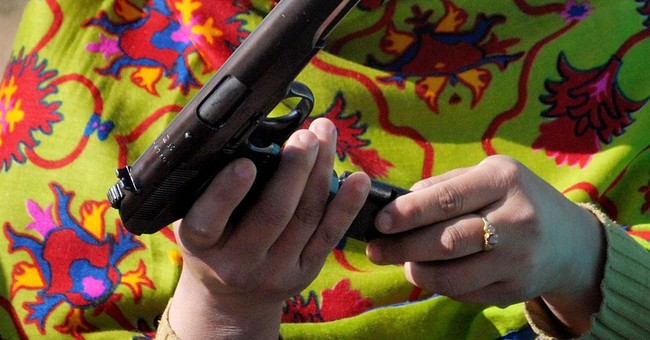 Once upon a time, it seemed as though women were encouraged to go through self-defense training. These classes were useful to a point, teaching women various kinds of avoidance tactics like not walking across a college campus at night all by their lonesome. But they were probably best known for teaching women how to fight back.

The classes seem to be falling out of favor as some segments of the population think it’s more useful to “teach men not to rape” than to teach women to protect themselves from the dirtbags that haven’t already learned that lesson by the time they’re old enough to understand what the word “rape” means.

They’re not completely gone, however. There’s one that just wrapped up on Sunday in Savannah.

The Rape Crisis Center of the Coastal Empire held a back to school self-defense class on Sunday.

The two-hour “Safer U” class was held at First Presbyterian Church of Savannah and taught by a certified and experienced Krav Maga instructor.

Participants learned verbal and physical techniques that can be used by anyone, regardless of your physical condition.

Now, I’m all for women learning how to fight back. We know from numerous examples that women who fight back are in a far better position than women who don’t.

But just as I’m critical of firearm instructors who neglect even to mention the need for training in non-firearm skills, I can’t help but see this as basically the same thing. It provides some tools, but not the best tool.

In other words, neglecting firearms means that these women are only being given part of what they need.

Imagine, if you will, that you’re given a toolbox and told to complete a building project with those tools. Within the toolbox are screwdrivers, saws, levels, wrenches, pliers, everything you need, except a hammer. Could you effectively build the project?

Yet that’s what happens when women–or anyone, for that matter–are given only part of the tools they need to protect themselves. That’s what these classes do.

To make matters worse, though, is that they provide a few techniques that will invariably work in class, but may be far more difficult to apply out in the real world, especially if they’re not practiced regularly. These classes rarely seem to lead to many of these women studying more techniques and working to hone what they know.

Maybe it’s just me, but I can’t help but be concerned that what these classes do is provide a false sense of confidence, that some of the women who attend these classes will think, “I can handle myself, so why not walk down this dark alleyway in the middle of the night? I know how to fend off any attack,” only to find out too late that they can’t.

At least with a firearm, they could pull the weapon and put a real stop to the attack.

But no. Far too many people seem to think that women aren’t capable of defending themselves with a gun.

What do you think? Are these classes sufficient? Or are they ignoring a key defensive tool that many women should consider using to protect themselves?