As Mobs Go After Ideological Opponents, Violence Will Eventually Follow 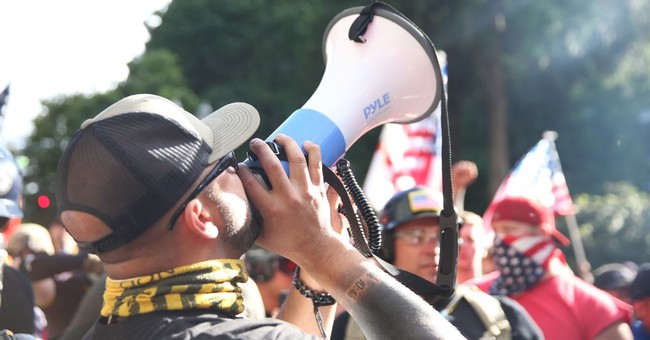 Can you imagine going to grab yourself some breakfast, only to find a mob hounding you? Whistles going off in your ears, bullhorns being stuck in your face, all kinds of things designed exclusively to make you feel incredibly uncomfortable.

And this comes from the same group of people who think using a pronoun someone doesn’t like is violence.

However, the mob that went after Turning Point USA’s Charlie Kirk and Candace Owens wasn’t just throwing around incorrect pronouns.

Charlie Kirk and I just got ATTACKED and protested by ANTIFA for eating breakfast. They are currently following us through Philly. ALL BLACK AND HISPANIC police force protecting us as they scream “f*ck the racist police”. pic.twitter.com/x5WUNr9mM6

To be clear: ANTIFA, an all-white fascist organization, just grew violent and attacked an all-black and Hispanic police force.

Because I, a BLACK woman, was eating breakfast.

Is this the civil rights era all over again? pic.twitter.com/piJfnopniW

There’s plenty more evidence, but this is enough. Regardless of how you feel about Owens and Kirk, what this represents is an escalation from earlier harassment. First, it was focused on administration officials, then lawmakers like Mitch McConnell. Now, it’s personalities like Owens and Kirk who are involved in activist organizations.

Of course, to be fair, Owen and Kirk aren’t the first. It’s happened before.

So far, it’s been…well, I was going to say “relatively peaceful,” but I’m not sure that term applies. Let’s just say it’s been somewhat restrained.

However, mobs feed off of one another. Over time, what is considered acceptable starts to shift, and it’s only a matter of time before it gets ugly. However, as RedState‘s Brandon Morse notes, it could have happened this time just with what was taking place in the videos.

If the whistleblowing kid sidled up too close to my loved ones, what would my reaction be in the moment? If they put a bullhorn in their face and began screaming, would I be able to keep my cool? What if they threw liquids on them? Could I just raise my hands up? Would it even be responsible of me to not become physical in some way in order to make them aware that there is a line, and crossing it could result in physical harm, or should I just pull them closer to me and lead them away as best I can?

It’s easy to ponder these questions while I’m sitting in my office behind a keyboard watching it happen to somebody else. No adrenaline in my system, my heart isn’t pounding in my ears, and my fight or flight instincts aren’t trying to take over my reason. I could speculate as to my reaction all day, but until I’m put in that situation where my loved ones are in danger, I’ll never really know.

But rest assured, if the left continues to normalize this tactic of confronting right-wing people while they’re minding their own business in public, we will know.

Even if the left doesn’t start the violence, they’re responsible for it. They’re the guy bouncing around, yapping, talking smack and antagonizing until someone has no choice but to act.

Of course, they won’t admit their responsibility. They won’t say, “You know, this was a bad idea. Our mistake.”

No, they’ll go on about “peaceful protests” and claim they’re just exercising their free speech, but while they might have a right to be jackasses to people trying to grab a little breakfast, it doesn’t mean it’s particularly wise. They’re going to keep it up until someone on either side reacts. Then, regardless of what happens, folks on this side of the aisle are going to get the blame.

You all know it’s true.

If we throw a punch, we’re all violent thugs. Videos will circulate showing the punch and nothing before it because, well, it won’t matter. They’ll leave out the hounding, the attempts at intimidation, the water being slung on people…or things worse than water. They’ll pretend they were just standing there, minding their own business when out of the blue, one of theirs got punched.

Ask a police officer how often they hear that story from street thugs. They’ll tell you just how common it is and just how often it’s total male bovine excrement.

Violence will, in time, follow one of these incidents and regardless of who starts it or why, it will likely lead to more violence.

Don’t get me wrong, it won’t be the first time the left has engaged in violence against their opponents in recent history. The so-called Battle of Berkeley stands paramount in my mind. But that was a protest where a mob attacked and thought they could intimidate their opponents, only to find out it wouldn’t work.

What’s next may well be one of these mobs taking on a lone individual, and it may be ugly.

Either way, the blood that is spilled rests on the head of those who think mobs should try and intimidate people who disagree with them.