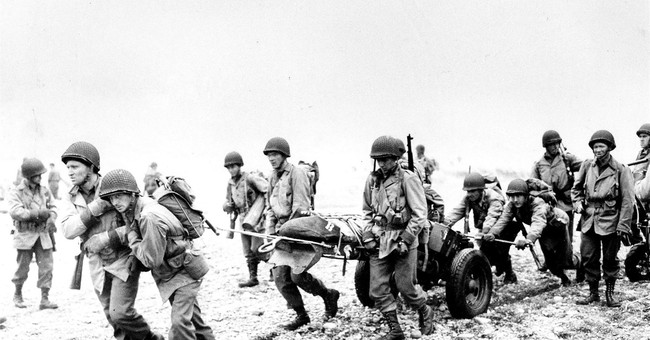 World War II was a long time ago, but anyone who has studied it knows just how costly an Allied invasion of Japan would likely have been. The Japanese troops were almost fanatical in their loyalty and were more than willing to die for the cause.

At some point, it was inevitable that the war was going to come to Japanese shores and the Imperial Japanese military likely began prepping for an invasion they were sure would come.

At least, that’s one explanation for the massive stockpile of weapons recently found beneath a Japanese elementary school.

About 1,400 firearms and 1,200 swords believed to be from the period of World War II were discovered buried at an elementary school in western Tokyo, city officials said Monday.

Grenades, bullets and cannonballs were also found one to two meters underneath the grounds of the Tanashi Elementary School in the city of Nishitokyo.

The discovery of the cache of weapons came during excavation work that began in July linked to the construction of a building, the officials said.

Local officials are working with the police and the Japanese Self Defense Forces to dispose of the weapons properly. They believe the weapons weren’t part of a stockpile preparing for invasion but were disposed of there after the war was over.

Part of me is a little sad that some of these weapons will be destroyed. Japan isn’t exactly a gun-friendly country, after all, and it’s not like they would put these in collector’s hands anyway, but still. I mean, these guns are a part of history. Who knows, someone might have taken a shot at my grandfather with one of those.

On the other hand, clicking on the above link will show you the condition of these guns, and it’s not pretty. While it may be possible to restore them, it’s probably not practical. These have been in the ground too long to make any restoration efforts worthwhile. With luck, a few will find their way into museums, perhaps with commentary about why they were in the ground.

The presence of so many swords is interesting, mostly because swords were obsolete in modern warfare by the 1940’s. Sure, the Japanese still used them in combat, but they weren’t first-choice weapons by any stretch. The number of swords is staggering to me since those were generally relegated to officers.

Still, those might be worth trying to salvage, perhaps, but it seems unlikely to happen. Again, Japan isn’t fond of an armed citizenry. In their culture, that seems to be accepted, but it’s still a shame.

There’s a lot of history that was buried beneath that school.

Let’s hope that while these weapons might not be worth restoring, the whole situation will be studied so we can understand what happened with these weapons and why they were deposited there. After all, piles of weapons like this are apparently rare in residential areas, so that leaves a lot of questions to be answered. As someone who loves history, I just hope they’re answered soon.

Former CDC Director Gives Alarming Statistic on Fully Vaccinated COVID Deaths
Townhall
Condoleezza Rice talks some sense into the hosts of 'The View' regarding critical race theory in schools
Twitchy
Inject Into My Veins: Condi Rice Stuns 'View' Hosts With Knockout Argument Against Critical Race Theory
Redstate
They're at It Again: The Left Is Using Its California Playbook in Virginia
PJ Media