Antifa At Charlottesville Turn Their Sights On Police 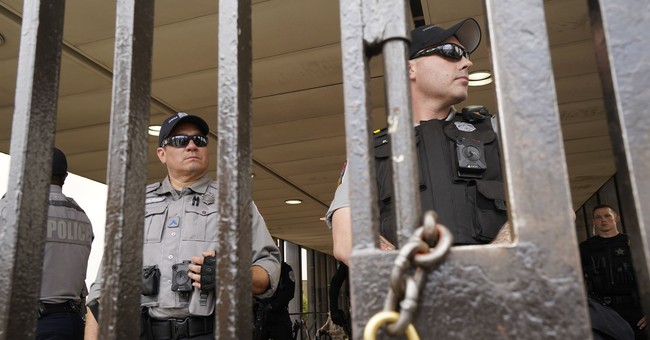 The so-called “United The Right 2” in Charlottesville, VA took place over the weekend. This time, it was sparsely attended by anyone except the Antifa goons who brought the majority of the violence that disrupted the first even a year ago. Considering the “right” mostly showed up last year, I’m not complaining.

However, without real or imagined racists demonstrating to serve as their target this year, Antifa promptly turned onto another target.

Confusion over an extraordinary police presence on the anniversary of a violent and deadly white nationalist rally turned into anger Saturday night as hundreds of black-clad protesters marched through the streets surrounding the University of Virginia here, screaming at police and calling for an end to white supremacy.

The protesters gathered around the historical Rotunda, where a year ago white supremacists had shouted anti-Semitic slogans and carried torches, and chanted slogans of their own — against the police, against white supremacy, and against the University of Virginia.

“Last year they came with torches,” said a large banner in front of a monument of Thomas Jefferson. “This year they come with badges.”

The mood in the crowd began to shift when, as speakers addressed a large crowd outside Brooks Hall, dozens of police officers clad in riot gear lined up along one side of the field. Many of the protesters called the police action a provocation — another symbol, they said, of the overpolicing of America — and started chanting at the officers, who were holding shields and wearing helmets.

“It’s really hard to defend our civil society when [police] do this,” said one protester, Tom Freeman. “They just marched down on us without any provocation. Nothing. It just fits everything they say about them, and I’m not even an anti-police person.”

Look, last year, there was a major problem, and the police response was not exactly the highlight of the weekend. Law enforcement was heavily criticized for stepping back and doing pretty much nothing. This year, they wanted to be more pro-active.

Had there been a large contingent of racists, the leftists in the crowd would likely have applauded the police presence, especially if scuffles like this one (around the 0:25 mark) happened with neo-Nazis.

But, it seems that since Antifa was pretty much the only ones there, it’s forbidden for the police to be present.

“I see a disproportionality,” said Lisa Woolfork, a U-Va. professor and an activist with the Charlottesville Black Lives Matter. “Unless there is something they’re not telling us and have some intelligence that the white nationalists will still march in force, it seems like who they’re gearing up to monitor and observe and contain and discipline are those of us who want to resist fascism and racism.”

Well, let’s keep one thing in mind. Racism, for all of its vileness, isn’t illegal. Someone can be racist and be law-abiding. Racism and law-breaking often go hand in hand–the number of people who are part of racist prison gangs alone speaks to that fact–it doesn’t always.

Antifa, however, routinely destroys private property, commits assault, throws rocks and bottles, and other acts of violence all in the service of their ideology. I can’t imagine why police would possibly keep a strong police presence even if they knew the racists weren’t coming this year. I mean, it’s just a little violence between friends, right?