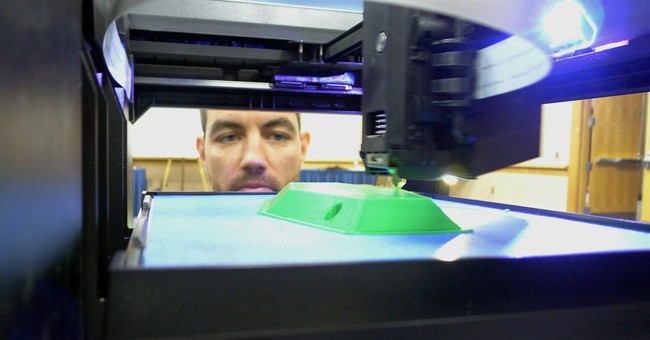 There’s something in the water down there in Broward County. I get that something awful happened earlier this year, and I can give them a little bit of slack for some of it, but there’s been an awful lot of dumb in that county.

The latest comes from their library system, of all blasted things.

You see, they seem to be terrified of people making guns on 3D printers the library has.

The national debate over 3D printed guns has reached Broward County. Starting Monday, Broward County’s Library system suspended use of all 3D printers at its facilities, citing the need for extra caution and weapon concerns.

The suspension was first reported by the Sun Sentinel. Broward libraries currently have seven printers that print 3D objects, in Pompano Beach, Coral Springs, and at the main library in Downtown Fort Lauderdale.

Broward County Library Director Kelvin Watson doesn’t know how long the printers will be off limits to the public.

Watson told WLRN Monday that the library system is taking the break to provide staff with additional training on how the printers should be used, and how to handle any potential printing of weapons pieces, not only guns.

“Knives…guns…whatever is able to be printed,” Watson said.

This follows a non-fatal shooting in a homeless camp just outside of the main library branch. Watson claims the two events aren’t related in any way.

Frankly, it doesn’t matter all that much if they are. They’re idiots either way.

Look, if someone is going to print a gun–something which takes a long, long time–they’re not going to use a public library to do it, especially since 3D printers can be built with freaking Lego.

Anyone who wants to build a gun for nefarious purposes isn’t likely to use the public library to print guns or gun parts. That’s way too easy to track. They’re more likely to find someone who has a 3D printer and use a private device, making it much less obvious what they’re doing.

This isn’t an issue.

Luckily, this isn’t a long-term thing and people who want to print…well, whatever the hell folks want to print on 3D printers, will be able to get back to it.

But Broward County is panicking about guns. They have been for quite some time now, and they need to get over it. 3D printed guns aren’t some terrifying thing that will take over the country.

Watson specifically mentions knives as a concern. It makes me wonder if the library is also concerned about rice.

That said, I do get the concern. I think it’s overblown, but I get it. People are going to do bad things no matter what, but there’s no reason the library has to enable it.

However, I’ll also note that there are a lot of parts to a firearm that non-gun people will never recognize, so if someone is dumb enough to use a library to print their gun, would the staff even know?