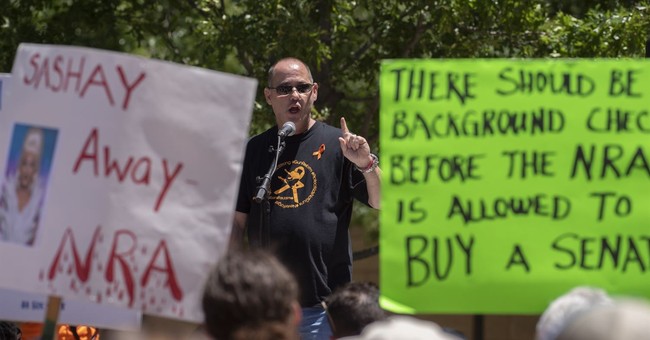 I can’t imagine what it must be like to lose a child. When I look at both of my children, the idea of them suddenly not being here rips me apart. I can’t help but feel sympathy for any parent who loses their child suddenly.

But that doesn’t make anyone immune to criticism, especially when they deserve it.

For example, Fred Gutenberg lost his daughter, Rebecca, during the Parkland massacre. I get that he’s upset over that and looking for people to blame, but when he decided to take aim at the wrong people, he went full potato.

Dana, do not use the tragedy of my daughters murder to make jokes. I have been very vocal about all who failed, but blame you and the NRA most. Your efforts to make this and every other gun incident about anything but guns is the reason my daughter is dead and others are dead. https://t.co/Yl7GyWP7Jr

He blames Dana and the NRA the most?

That’s funny because you know who I blame the most? The jackwagon who carried a gun into a school and opened fire on innocent high school kids.

Guttenberg is a prime example of the insanity of the anti-gun left. He’s so ready to blame the NRA over his daughter’s death that he’s what? Willing to absolve the actual killer of his sin?

Let’s not even get into the fact that officials and Marjory Stoneman Douglas High School had plenty of opportunities to deal with the killer long before he took a life, but shirked their responsibility. Let’s ignore the fact that the Broward County Sheriff’s Office answered dozens of calls about the killer long before he took a life, but didn’t act on any of those–which, I might add, might have prevented him from buying the gun he used to murder people–therefore shirking their responsibilities. Let’s not even discuss the school resource officer who refused to enter the building and engage the attacker, which may have saved lives, therefore shirking his responsibility.

Look, while I think he’s wrong for placing any blame on the NRA, I get why he is. I can see the thinking behind it, even if I disagree with it completely.

However, to blame the NRA more than entities who could have directly prevented the attack if they’d just done their jobs? That reeks of pure partisanship more than rational thought.

Yes, the man lost his daughter. I can only imagine how difficult that can be. That one fact, however, doesn’t give him an eternal hall pass to avoid criticism for saying blatantly ridiculous things.

The AR-15 used didn’t kill those kids all on its own. There was a maniac behind the trigger. A human being (of sorts) walked into that school and took human life. That is who deserves the blame here, not an organization dedicating to protecting our right to keep and bear arms.

Further, as noted previously, there were opportunities to take the killer and make him someone who couldn’t legally buy a firearm. This would have likely prevented the attack while, at the same time, do nothing to infringe on the rights of average, ordinary, law-abiding Americans. However, the school and the sheriff’s office did nothing to stop it, and they’re the ones who saw all the warning signs.

Refusal to place the lion’s share of the blame on the killer and those who saw the signs and did nothing isn’t the hallmarks of a mind worth listening to on, well, pretty much anything.

Gavin Newsom: Thank God We Haven't Followed Ron DeSantis' Governing Example in California
Townhall
'Are you kidding me with this?': MSNBC assembled quite the panel to discuss the hostage situation at Texas synagogue
Twitchy
Stephen Miller Takes Down MSNBC Analyst After His Admission About Intel Community
Redstate
Street Artists on Both Coasts Take Aim at COVID Authoritarianism and the Lefties Can't Cope
PJ Media