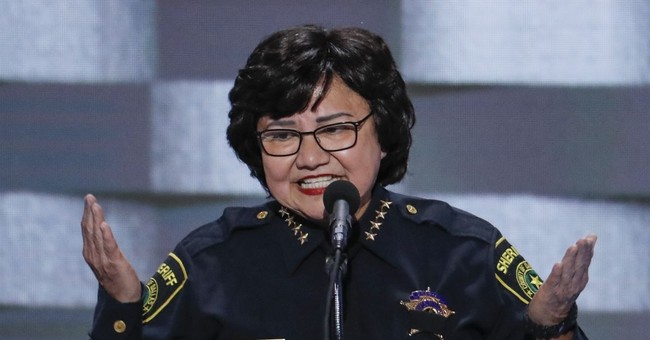 Democrats have a long and storied history of arguing that the average gun owner is irresponsible. Why else would we supposedly need laws telling us to lock up our guns despite our personal situations?

They also have a history of projecting, such as how gun control candidates can turn right around and allegedly commit murder. With that in mind, it shouldn’t be shocking that a candidate for governor in Texas, a former sheriff, has lost her department issued firearm.

A gun used by Texas Democratic gubernatorial candidate Lupe Valdez when she was Dallas County sheriff has not been returned, Sheriff’s Department records show.

Valdez was supplied with the Beretta 9mm pistol in 2011 when a gun of the same model she owned “sustained a malfunction,” according to a sheriff’s department report obtained by The Dallas Morning News.

“It is likely that this weapon could have been stolen or misplaced during Sheriff Valdez’s moving transition,” the report stated.

A police report had to be generated because the weapon could be in the hands of a criminal or used to commit a crime.

Raul Reyna, spokesman for the sheriff’s department, told The News Monday in an email: “Former Sheriff Valdez has been approached about the missing weapon and is working with the Sheriff’s Department to locate the missing firearm.”

Of course, if this were you or me, Valdez would likely be talking about just how horribly irresponsible we were for not knowing immediately where the gun is.

Officials aren’t ruling out the possibility that the gun was turned in and lost at that point, but I’m doubtful. After all, I can’t help but believe that if she returned the issued weapon, she would have said so rather than this whole, “Oh, I don’t know what happened to it. Woe is me,” crap we’re seeing.

And it looks like she lost a gun, but thinks she’s responsible enough to be governor of one of the largest states in the country?

Sure. And I’m the King of Norway.

Luckily for Texans, she’s not likely to win. And since governor races don’t come with lovely parting gifts, the best she’ll get is a feeling of just how Texas feels about Democrats in general.

And that was what was likely to happen regardless of whether she’d lost a gun or not. I seriously doubt gun owners in Texas will look at Valdez with any degree of sympathy over something like this. After all, how do you lose a gun? If you’re actually someone who uses a firearm and trains with it to any degree, especially if you trust your protection to it, you know precisely where it is at all times. I know where all my guns are, even the “fun guns.”

But apparently, Democrats get a pass for being irresponsible with firearms. If this were a Republican, the story would have hit the national media and been the lead story for the last few days at least.

Again, it’s not likely she’s going to win regardless, and that’s a good thing. If Valdez can’t keep up with a firearm, imagine what kind of irresponsibility she’d show with the state’s budget?

8/21/2018 Update: Good news! The gun’s been found. Apparently, Valdez’s department was so absolutely squared away that the weapon had been turned in previously and never properly recorded.

It kind of makes you wonder how screwed up the entire state would end up under Valdez’s watch if her department couldn’t even record something as important as a firearm being turned in. Further, just how did Valdez not remember turning the blasted thing in?

That said, I called it the other way, so I’ll take the hit on that one.