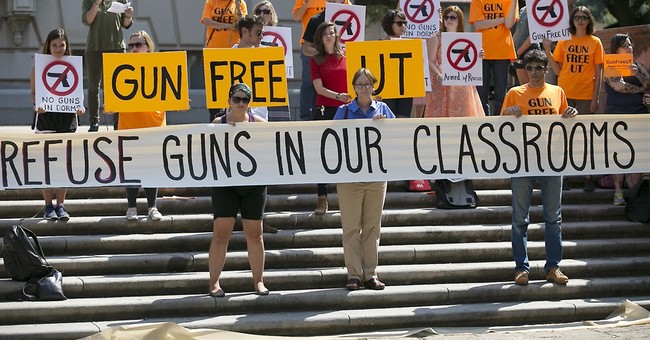 School campuses have been gun-free zones in most states for years now. Despite that status–or because of it–college campuses have been the target of shootings more than once. It seems that gun-free status doesn’t stop attacks from happening, it just disarms people who might be able to prevent them.

Additionally, disarming students means they’re disarmed too and from school as well, and that makes them prime targets for criminals. Especially when they know those students can’t be armed.

Because of all these factors, among others, many states have been repealing their laws banning guns on school campuses. One of those states is my home state of Georgia.

Fulton County Judge Kimberly Esmond Adams last week denied an injunction requested by the educators in a challenge that has been pending in the court for almost a year. Going against arguments voiced by the professors that they should be able to bar guns from their classes for various reasons, Adams rejected the case citing the defendants, Gov. Nathan Deal and state Attorney General Chris Carr, named in their official capacity, were exempt due to sovereign immunity.

The six professors filed their case last September, arguing the state’s new campus carry law, signed by Deal in after he vetoed a previous version, went against long-standing prohibitions at Georgia colleges and universities on guns, some dating back to 1810. Each had a specific example of how the law would affect their work, either through chilling vigorous class debates, or upping the chance of suicide, a tactic mirrored in a similar case in Texas that was likewise unsuccessful.

While some of the professors noted that they deal with controversial topics that often lead to heated arguments in class, thus causing them to be concerned of an irrational actor–not something that happens, but I get the concern–at least one professor was completely off her gourd.

Georgia Southwestern University visual arts professor Laurel Robinson runs the only glass-blowing program in the state where she gives open critiques of her students’ efforts, which are sometimes not well-received. Should a gun be brought into play in the class, where large tanks of compressed gas are present, she worries a resulting dangerous explosion could kill or injure others.

You know, my mother took glass-blowing at Georgia Southwestern University ages ago. She also had ready access to guns since my father was a police officer who kept firearms handy for home defense.

Guess what never crossed her mind? Yes, that includes when she had her work criticized.

It should be noted that campus carry isn’t some new feature that has never happened before. Utah, for example, has had campus carry for quite some time. Guess what they don’t have? A history of students shooting professors or other students in class over arguments.

The problem is that these professors probably deal with their political fellow travelers who are more than willing to visit violence on the opponents, and so they assume gun owners will do the same thing. The difference is that when someone decides to strap on a firearm before going about their day, they take on a responsibility. That responsibility is to check their emotions when others are freaking the hell out. They have to be a little cold, a little detached, when it comes to hot-button issues. They know they can’t get riled up beyond a certain point, and most just keep their heads down.

In other words, the scary scenarios described just don’t happen.

Even if they did, though, the judge would still be justified in slapping down the challenge. Even if it wasn’t sovereign immunity, the grounds could easily have been the state’s preemption law. As government employees, requiring guns not to be carried in their class could be argued as a circumvention of the state’s preemption law that blocks anyone but the General Assembly from creating gun control laws.

So this challenge was going to die a horrible, fiery death either way. So much the better for Georgia colleges.

Critics Notice Something Unusual in Video of Prisoner Exchange That Freed Griner
Townhall
DAMNING thread takes former head of Twitter Trust & Safety Yoel Roth APART tweet by tweet
Twitchy
Rising Republican Star Has a Plan for 2024 GOP Comeback and the Party Would Be Wise to Follow Her Lead
Redstate
The Morning Briefing: Brittney Griner Should Have Been Left to Rot in Russia
PJ Media