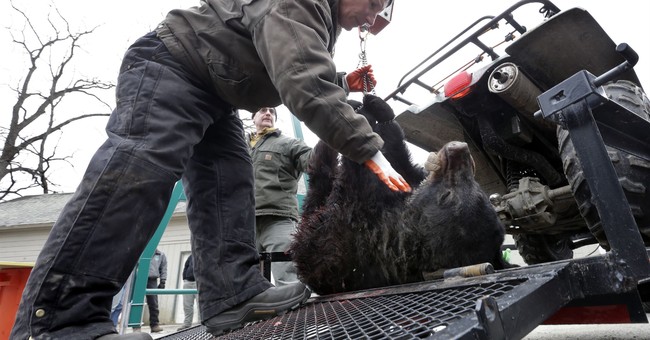 Anti-gunners often like to try and court the support of hunters. They often claim a certain gun isn’t useful for hunting, despite having never faced a charging hog when there aren’t any tree branches low enough to grab hold of, for example.

However, many anti-gunners are also anti-hunters. They don’t think we need hunting in our “civilized” time.

I suppose that’s what New Jersey Governor Phil Murphy thought when he made life a whole lot harder for bear hunters in that state.

The first-year Democratic governor announced the decision with an executive order, but stopped short of unilaterally ending the hunt altogether, saying he doesn’t have the authority.

“I am fulfilling my commitment to stop the bear hunt to the greatest extent of my authority by ordering the Department of Environmental Protection to prevent bear hunting on all public lands under the DEP’s jurisdiction,” Murphy said in a statement. He also called on lawmakers to take action.

Cody McLaughlin, a trustee with the nonprofit New Jersey Outdoor Alliance, which opposes efforts to stop the hunt, estimated that about three-fifths of hunters use public lands when hunting various quarry.

State officials have estimated around 3,500 bears live in northern New Jersey, and McLaughlin estimated that New Jersey has the densest bear populations on the continent.

I can’t say that I’m shocked. That’s precisely the kind of move I expect Murphy to make. He campaigned on ending the hunts, and it’s not surprising that he would take unilateral action. That way he can at least act like he tried to keep his promise.

What so many of these anti-hunters don’t get is that when you allow a population to get too dense in one area, the species as a whole suffers. Bears don’t exactly have much in the way of natural predators, after all. They’ll expand in numbers while the food supply remains constant. Hunting keeps that from happening, which is better for the species as a whole and far less cruel than letting attrition through starvation take their numbers down.

Murphy’s ban will basically make that cruel possibility a reality when it comes to state land, and if he gets his way, it’ll happen to the black bear population as a whole.

Meanwhile, the state will continue to lose revenue as hunters start to look elsewhere for their hunting enjoyment. After all, other states have bears and no qualms about letting hunters keep those populations in a sustainable range. They’ll be more than happy to accept the money of displaced New Jersey hunters who are looking to take a bear or two.

Any boost to the local economies will be appreciated too. I’m quite sure.

Murphy may be trying to keep a campaign promise, but it was a stupid promise to make and his state will, ultimately, suffer for it. Though, to be honest, the black bears up that way will probably suffer more.

Wait...Those Are the Words the Waukesha Christmas Rampage Used to Describe the Coverage of His Crime
Townhall
Fox News' Greg Gutfeld makes a Biden joke on 'The Five' and The Daily Beast's media reporter is on it
Twitchy
Kennedy Traps 'Wild-Eyed Leftist' Biden Judicial Nominee in Yuuge Lie
Redstate
40 Years Ago, Monty Python Predicted (and Mocked) Wokeness
PJ Media