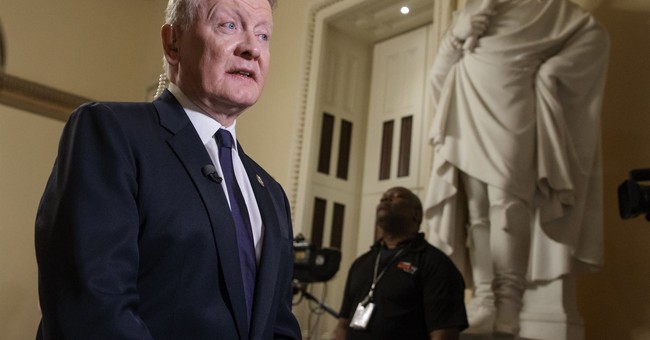 However, in New Jersey, that anti-gun Republican doesn’t seem to be as theoretical as some might like to believe.

Six years ago, Rep. Leonard Lance proudly boasted of his gun-rights pedigree, reminding voters that he scored a “100 percent voting record” from the National Rifle Association.

But on Friday, Lance, a Hunterdon County Republican, found himself heralded by one of the biggest names on the other side of the gun debate as a “problem solving representative.”

The Courage to Fight Gun Violence, a political action committee co-founded by Gabby Giffords, the Arizona congresswoman who was shot and seriously wounded in 2012, bestowed its blessing on Lance, startling other gun-safety groups and Democratic grass-roots activists who have turned Lance’s once-reliably safe Republican 7th District seat into a “toss-up” this November.

To his foes and critics, Lance’s staunch pro-Second Amendment advocacy was one of his biggest and most unambiguous vulnerabilities. Lance co-sponsored the “Protecting the Second Amendment Act of 2015” and had backed bills that would have forced New Jersey and other states with strict gun laws to honor “conceal and carry” permits issued in states with weak restrictions. He also opposed the renewal of the federal Assault Weapons Ban.

Yet over the past two years, Lance has cast votes and co-sponsored bills that represent a sharp pivot from his reliable pro-gun-rights record and from Republicans who rule the House. He co-sponsored legislation to allow funding federal research into gun violence, which the gun lobby has blocked for nearly two decades.

Lance also co-sponsored a ban on “bump stocks,” devices that allow semiautomatic rifles to emulate the rapid firepower of automatic rifles. And, perhaps his biggest conversion, Lance also backed a measure opposing “conceal and carry” reciprocity that he supported earlier. Neither of those bills went anywhere.

Critics said Lance was simply covering his tracks before it was too late.

In other words, they don’t believe him.

Frankly, they never will. Lance may have had a legitimate change of heart. Let’s be honest, the horrors of Las Vegas may well have been enough to make some change their minds on guns, at least to some extent. It might have been something else.

It doesn’t matter. What does matter is that now he’s backing the other side on some key matters. In particular, the gun research, especially since the federal government hasn’t barred funding for gun research. What it barred was funding for pro-gun control research. In other words, unbiased research is fine, which is what research is supposed to be.

Lance, if he were honest, should know that. Either he does, and he’s pandering, or he doesn’t, and he’s not well versed enough on the subject to help make laws about it, kind of like all the other lawmakers out there.

It’ll be interesting to see how Lance’s career goes from here. Is he just pandering to a constituency that is going more anti-gun, or is he having a real change of heart? Will the voters even care?

Either way, it’s clear which side he’s taking on the national stage.

Is This the Most Nonsensical Headline Yet About the COVID Vaccine?
Townhall
Wil Wheaton says 'f**k EVERYONE at Netflix' behind comedy festival featuring 'despicable bigot' Dave Chappelle
Twitchy
It's Over for Kamala
Redstate
Reps. Greene and Gohmert Finally Met the J6 Political Prisoners: What They Saw Isn't Pretty
PJ Media