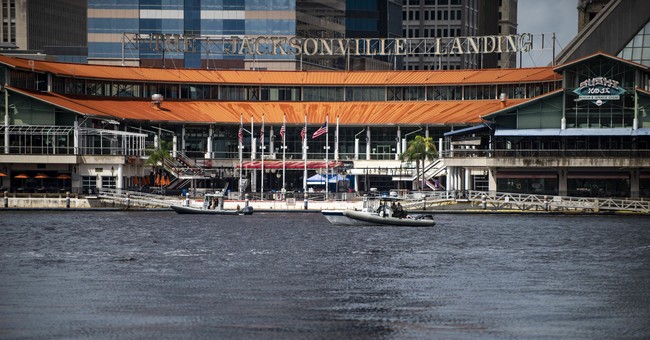 The dust hadn’t even settled on the events in Jacksonville. We still knew remarkably little about the shooter, his motivations, or much of anything else. Many of us were waiting for more information before we rushed to try and make an analysis of what transpired.

Then again, many of us are not Florida Democrats running for governor, either.

Gillum, Graham and Levine called for new leaders at the statehouse, while King and Greene vowed to stand up to the NRA and to keep fighting for gun control.

Democrats running for governor quickly pointed out that Sunday’s shooting followed the Parkland massacre in February, the Fort Lauderdale airport killings in 2017 and the Pulse Nightclub shooting of 2016.

The four who died Sunday increased the body count to 75 Floridians killed in mass shootings in 26 months.

“No more. These are our kids. Our friends. Our neighbors,” said Greene.

“We need to end these mass shootings – and the only way to do that is to vote out the politicians complicit in this cycle of death,” tweeted Graham, who has pledged to ban assault weapons with an executive order. The suspect is a Baltimore resident and used a handgun, authorities said.

That last bit is important.

You see, the killing took place in an apparent gun free zone–in this case, a bar. Being a Baltimore resident, he most likely obtained the firearm there and transported it to Florida. If he obtained it in Florida, then he violated federal law in doing so since such purchases have to go through an FFL in his home state. You can buy from an adjacent state, but unless my geography is worse than I thought, Maryland and Florida aren’t that close.

In other words, there’s no law Florida could have on the books that would have stopped this maniac’s rampage. None at all. This could just as easily have happened in California or New York, which already have strict gun control laws.

At this point, we don’t even know if the shooter bought the gun legally in the first place, but for the sake of argument, let’s say that he did.

That appears to be the last legal act he committed in this chain of events. At every other point, he seems to have ignored the law and indulged his own impulses before carrying out this heinous act. Once again, we see that if someone was going to commit a mass shooting, they break a number of laws in the process. More laws don’t stop these kinds of shootings.

But leave it to Democrats to scream about the need for more gun control when we don’t even know how the guy got the gun in the first place. Leave it to them to scream about more laws when there were plenty broken well before the first trigger pull. None of that matters to people like that. All they see is a chance to try and score some political points on the back of a tragedy.

If you want to prevent another attack like this, then eliminate gun free zones. In Florida, I’d be willing to bet that at least one person in that bar would have been carrying if it wasn’t prohibited and would have been able to stop the attack in its tracks.

Of course, since that doesn’t serve the anti-gun narrative, you’re not going to hear it from these Democrats.