What We Know About The Jacksonville Shooting So Far 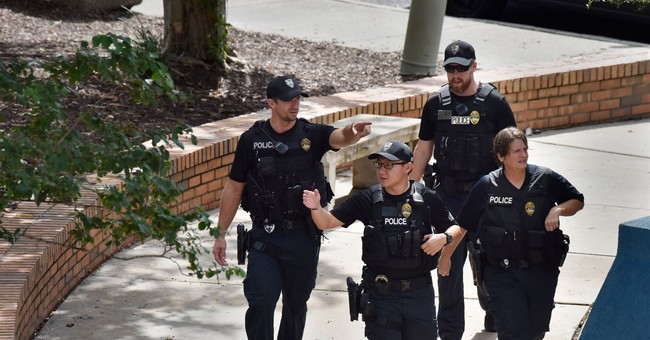 Sunday, we found out about the horrible news coming from Jacksonville, Fla. where a gunman opened fire at a competitive video game tournament. Three people are dead, 11 others are injured.

The gunman has been identified as a 24-year-old resident of Baltimore, Md. We are opting not to name him as is our policy at Bearing Arms. We don’t want to make these shooters famous since fame is at least part of the reason some of these shootings happen.

Here are some of the details:

Ryen Aleman was engrossed in the virtual world, focused on the video game in front of him, when he realized the gunshots he was hearing were real. He ducked and bolted for a restroom to take cover.

Another mass shooting was unfolding in Florida, this time at a tournament for competitive players of the football video game, Madden, in Jacksonville. The winners would go on to a higher level tournament in Las Vegas in October, where large cash prizes could be won.

Participants had gathered at the Jacksonville Landing Complex, an open-air marketplace with stores, bars and restaurants along the St. Johns River.

[The killer], a 24-year-old gamer from Baltimore, Maryland, was in Jacksonville for the tournament at GLHF Game Bar, in the back of a pizza restaurant. On Sunday, he brought a gun into the venue and opened fire, killing two people. Then he turned the gun on himself, Jacksonville Sheriff Mike Williams said. Police have not released a possible motive.

[He] used at least one handgun in the shooting, the sheriff said. Nine other people suffered gunshot wounds and two people were injured fleeing the area, Williams said. The victims were all in stable condition at local hospitals, the sheriff said.

Shortly after 1:30 p.m., 911 calls started pouring in about a shooting, according to Williams. Officers were on the scene within two minutes.
Aleman said he huddled in the bathroom for 10 minutes and ran from the scene.

“I’m still shocked, I can hardly talk,” he told CNN.

The killer was apparently pretty good at Madden and had won previous tournaments, including one held by the Buffalo Bills. In an interview with former Bills player Steve Tasker, the killer said, “I think personally I’m one of the better players.”

Word is that the killer lost in an earlier round of the tournament and became outraged, then got his gun and opened fire.

At this time, we don’t know a whole lot, but we do know a few things.

First, we know that Baltimore has strict gun control laws on the books. Maybe not as strict as California or New York, but they’re not even close to being in the running as a gun-friendly state. In fact, just about every law anti-gunners are clamoring for at the national level exists in Maryland. None of them seemed to have stopped the shooter from obtaining a firearm.

It also appears that, as per usual, this shooting happened in a gun free zone. Florida law bans the carrying of firearms in bars, thus making it illegal for the firearm to be in the bar in the first place. This also had the effect of creating a disarmed pool of targets for the killer. This sounds like a spur of the moment killing rather than a premeditated attack, but it still happened in yet another gun free zone. Odd how that always seems to be the case, isn’t it?

We will continue to follow this story as it develops, but in the meantime, our thoughts and prayers go out to all those affected.

Inmate Overdose Deaths Show The Limits Of A Security State

Wait...That's How Many Students Had a Problem With Dave Chappelle When He Visited His Alma Mater?
Townhall
It sure looks like Kamala Harris is rearranging the deck chairs on her proverbial Titanic
Twitchy
Justice Thomas Tears Into Pro-Abortion Lawyers With Hard Opening Questions
Redstate
40 Years Ago, Monty Python Predicted (and Mocked) Wokeness
PJ Media