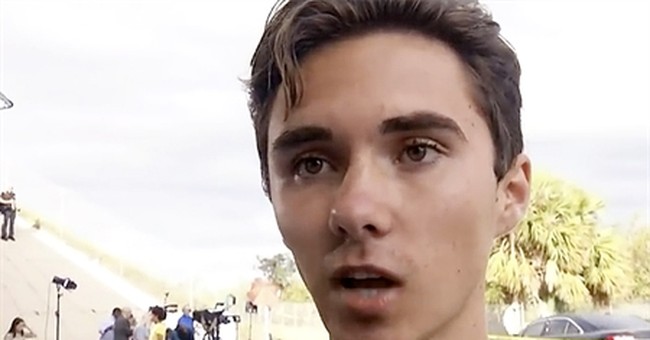 David Hogg feels pretty good about himself. He has adoring fans, girls begging for selfies with him, and even celebrities who express admiration for him. When you’re 18-years-old, that’s a lot of reason to think you’re actually someone.

Plus, let’s be honest here. Hogg has had a few successes here and there. His boycott against Laura Ingram may not have pushed her off the air, but it did create quite a pinch for Fox News. He managed to press Publix not to support candidates for office–not exactly the intention, but it also means they won’t support pro-gun candidates, so I’m sure he sees it as a win.

We will destroy you by using the two things you fear most.

Love and economics 🙂 see you soon.

Kid, you’re out of your depth.

You see, boycotts only work when you get people who would otherwise buy a product not to do so.  If you want to boycott Ford, you buy a Chevy instead, for example.

However, most people won’t boycott Bugatti simply because they were never going to buy a Bugatti anyway.

In a similar vein, Hogg’s threats to take down Smith & Wesson are empty for one simple reason: Smith & Wesson customers generally think David Hogg is a twit who needs to learn what the hell he’s talking. They’re not about to boycott Smith & Wesson because some pretentious teenager who thinks he matters tells them to boycott the company.

The people who follow Hogg are anti-gun activists, not gun owners. Oh, there might be one or two gun owners in there, but by and large, they’re rabid anti-gun activists who think firearms are awful. Hell, the handful who may own guns now isn’t exactly the kind of people who will be buying another in the near future.

In other words, his followers aren’t likely to do a thing to hurt Smith & Wesson’s bottom line.

But you know what his efforts might just do? They might tick off enough of us that we head to the gun store and buy a Smith & Wesson just out of spite.

In his effort to threaten and take down the company, Hogg might just put Smith & Wesson on more stable financial footing than any other firearm manufacturer in the nation.

Of course, Hogg thinks he can do it, which is hilarious. He believes he can somehow dissuade gun buyers from Smith & Wesson? Oh, the hilarity.

But then again, he’s also thinking that somehow Smith & Wesson is bound by the assault weapon ban that bars the selling of certain firearms, not the manufacture of them. Smith & Wesson isn’t selling these guns in places they’re not legally allowed. They’re making them for sale in states that aren’t run by morons.

And, if the law changed to bar them from making them, they’d simply open up a plant in a free state and start making the guns there. This isn’t rocket science.

Except for Hogg, who thinks the law (a) applies to the manufacturing of certain firearms and (b) that he can force Smith & Wesson to do anything.

My advice? Invest in popcorn futures. This is going to be good.

The World Has Gone Crazy
Townhall
Grover Norquist: 'Democrat Senators have voted for a massive tax hike during a recession'
Twitchy
Bill Barr Says GOP Must Choose Between Donald Trump and Holding the White House for 3 Terms, Is He Right?
Redstate
Gaslighting: How the Mainstream Media Tries to Drive You to the Left
PJ Media