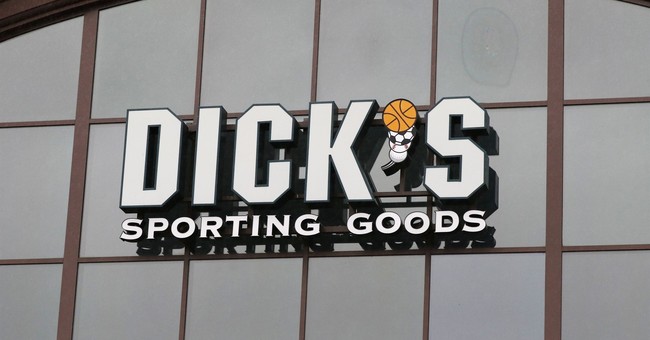 Dick’s Sporting Goods wanted the whole world to know it was one of the “good guys” in the gun debate. It unilaterally decided to discriminate against certain law-abiding adults and refuse to sell guns to anyone aged 18-21 as well as removing AR-15 style rifles from the last of its stores. It wanted to make sure anti-gun zealots counted them as acceptable.

And, it looked like the strategy might pan out for a bit there. They had a good quarter. Stock’s responded.

However, it also looked like the spike in earnings then was a short-term boost of people wanting to give Dick’s a pat on the head. I commented back in May that I didn’t expect it to last.

Dick’s Sporting Goods (DKS.N) reported a bigger-than-expected drop in quarterly same-store sales on Wednesday and forecast further declines this year, hit by tighter gun controls and a drop in Under Armour sales.

Shares in the company fell as much as 10 percent after it posted a 1.9 percent drop in same-store sales, bigger than analysts’ average estimate of a 0.62 percent dip.

Dick’s was one of the first retailers to stop selling assault rifles and high-capacity magazines as well as bar the sale of guns to people under age 21 following a massacre at a Florida high school in February.

The company had predicted that its hunting guns business would be pressurized by the change in policy but said the move should also attract more people to its stores.

Dick’s said on Wednesday it expected annual same-store sales to decline by 3 percent to 4 percent, compared with a 0.3 percent decline in 2017.

Still, Dick’s said it expects these headwinds to subside and is confident that its sales trajectory will improve next year. It raised its earnings per share forecast for the year ending February 2019 to between $3.02 and $3.20 versus an earlier forecast of $2.92 to $3.12.

“The improvement in the U.S. athletic market should overcome the weakness in hunting, electronics, and Under Armour as we get into 2019,” Feldman added.

I’m not about to say that gun owners account for some massive majority of people who utilize sporting goods in general, because that’s not particularly true. But gun owners are the people most likely to remember slights, meaning they won’t be going back to Dick’s any time soon.

In the meantime, those who approved of Dick’s anti-gun stance are people who generally aren’t driven by that particular issue. They may approve, but not so much that it’ll make them loyal to Dick’s as a store of choice. They’re going to go wherever they find the best prices on a given product.

Second Amendment advocates are giddy at this news. The schadenfreude is delicious.

Of course, only time will tell if this trend continues, but I know where the smart money is.

Undercover Footage: Women Drugged with Xanax Before Speaking to Abortionist
Townhall
City of Orlando dumps on the 4th of July, then tries to walk it back
Twitchy
DeSantis Fires Back After Gavin Newsom's Pathetic Anti-Florida Ad Is Revealed
Redstate
Five Tips on How to Have Fun AND Annoy Your Commie Neighbors on the 4th of July
PJ Media