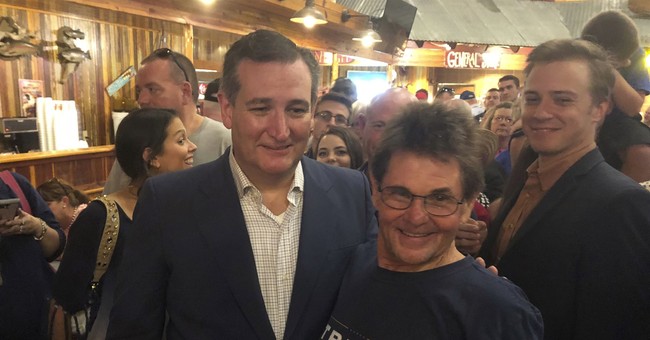 “No one wants to take your guns away,” someone will claim when the subject of gun control comes up. They say it as a way of trying to ease fears of gun confiscation and all that would follow in the wake of something like that.

But we know better.

A supporter of Beto O’Rourke decided to heckle Ted Cruz at a campaign event.

Beto O’Rourke protester yelling in town hall on gun control.
Texan man- “Come and take it!”
Beto guy, “We will!”
Then @tedcruz said, That exchange right there is what this whole campaign is about!
Crowd explodes. #2A pic.twitter.com/2LZW7ot992

The O’Rourke supporter let the mask slip. He had no problem responding that the anti-gunners will want to come and take our guns away because we know that deep down, that’s the end game. That’s the goal.

Oh, not for everyone. There may well be some who want to stop at, say, an assault weapon ban or a magazine capacity restriction. There may be some who only want universal background checks and an age limit of 21 for long guns, I suppose. There are some that really may not want to take them all.

But the anti-gun movement as a whole? They don’t care that gun rights are the line in the sand that many Second Amendment supporters will go to war over. Hell, I think some of them are excited by the idea.

O’Rourke’s supporter commented, “We will.” But he probably won’t. He’ll be safe and secure in his home watching the news, thinking about how all those gun owners deserve what’s happening to them.

Luckily, this is in Texas. I don’t care what the polls say about how close the race is; I don’t see a rabid liberal like O’Rourke winning against someone like Ted Cruz. In part, it’s because O’Rourke and people like this guy want the guns. They want them all, and they won’t be happy until they get them all.

That’s not Texas. Texas is a state deep in the heart of gun country. While some anti-gunners undoubtedly live there and like living there, the majority of the state supports the right to keep and bear arms, as a matter of heritage if nothing else.

Cruz’s response was perfect. He’s right that it summed up the campaign perfectly. That’s what this campaign season is really about. The Democrats have gone full-on gun control with their candidates. They expect to retake Congress, then take away our guns to some degree. Then they’ll start working to take more of our gun rights away, inch by inch.

They really think that someone will. They’re eager for that moment.

When the dipstick said so, Cruz smacked him down in the best way possible. He didn’t debate the guy, he just let the guy’s words do the speaking for him. The Beto supporter made the case we all knew he would make, and in the process, did more to re-elect Ted Cruz than anything the Cruz campaign could do.