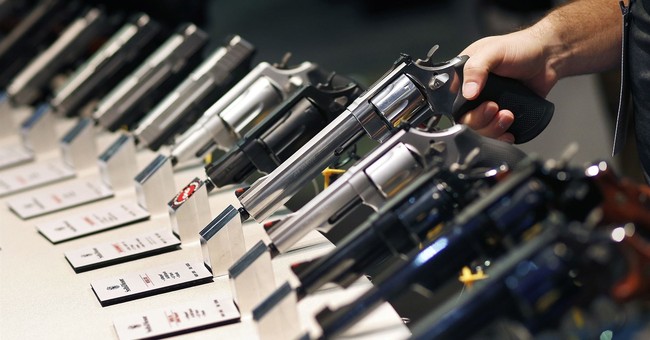 David Hogg thinks he can threaten Smith & Wesson, and he’s convinced he can extort money out of them for his cause for some ridiculous reason. If he’s going to take the company down, he has his work cut out for him.

It seems American Outdoor Brands, which used to trade on the stock market as Smith & Wesson, is doing just fine at the moment.

Shares of American Outdoor Brands Corporation jumped more than 20 percent after the bell on Thursday after the company reported earnings that beat Wall Street analysts’ expectations.

Here’s how the company did compared with Thomson Reuters consensus estimates:

American Outdoor Brands was known as Smith & Wesson Holdings until 2016, after its firearms brand that makes up the majority of the company’s revenues.

The stock itself is still down 24 percent, much of which was spawned by the anti-gun climate that erupted in the immediate aftermath of Parkland.

I suspect Hogg is looking at this and thinking, “More for me” or something equally stupid, but he shouldn’t.

If that’s the case, then we have more people buying guns.

That’s not good for gun control folks, no matter how they try to shake it out. The gun industry thriving is a bad thing for them, especially in a climate where they’re trying to make it impossible for these companies to do business. Their efforts aren’t working. Not only are there financial institutions that will still work with the firearm industry, the gun companies appear to be doing just fine.

Anti-gunners have tried to wage an asymmetrical political war against the gun industry, but it’s failing. These earnings reports, especially in light of Dick’s Sporting Goods having such poor earnings, seem to make it clear that this isn’t going to win them the day. There are too many of us who will continue to buy guns so long as we’re able.

I, for one, am thrilled to hear about Smith & Wesson’s good fortune. So long as it refuses to capitulate to the demands of a teenage tyrant who wants them to help fund their own destruction, it’ll be just fine. And, I don’t expect Smith & Wesson to listen to the twit from Florida.

We’ll have to take a look to see what other publicly traded gun companies are saying about their earnings for this quarter and get an idea if this is across the board, or just Smith & Wesson having a damn good quarter. I know what my money is on, though.