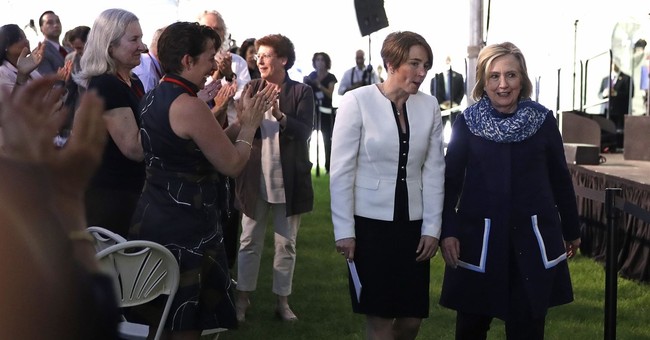 Attorneys general don’t get to make laws. They enforce them, and their interpretation of those laws is important as they decide what a law means. After all, if they decide a firearm printing actually means you’re open carrying, you’re going to have a problem. Sure, the courts can reject the argument, but that starts a whole process.

On the flip side, if an attorney general decides that an attempt at concealing it is all that’s required, while previous AGs felt otherwise, it can have a drastic impact on how people can carry a firearm.

But again, they don’t get to create law out of decree. But, that’s precisely what a lawsuit alleges Massachusetts Attorney General Maura Healey has done. Now she’s catching even more flak over her decision to reinterpret the law to encompass many guns developed specifically to comply with Massachusetts’ assault weapon ban.

Democratic attorney general Maura Healey announced on July 20, 2016, that she would be unilaterally reinterpreting the state’s decades-old assault weapons ban to expand what constitutes so-called copycat gun designs. Healey accused the gun industry of using “copycat” designs to skirt the law. She vowed to take action against “combat-style weapons.”

“The gun industry has openly defied our laws here in Massachusetts for nearly two decades,” Healey said at the time. “That ends today. We have a moral and legal responsibility to ensure that combat-style weapons are off our streets and out of the hands of those who would use them to kill innocent people.”

Healey’s order laid out a new test to determine if a gun falls under her new “copycat” definition. “A weapon is a copy or duplicate if its internal operating system is essentially the same as those of a specifically-banned weapon or if the gun has key functional components that are interchangeable with those of a banned weapon,” Healey’s announcement said.

Gun sellers and gun-rights advocates immediately criticized the move as confusingly vague, in violation of state law for rulemaking, contrary to the legislature’s intent, and even unconstitutional.

“With the 2016 ‘Enforcement Action,’ the attorney general’s office demonstrated how little it understands about firearms,” Lawrence G. Keane, NSSF senior vice president, said in a statement. “Attorney General Healy and her staff clearly overreached their statutory authority and decided to legislate from that office without the benefit of any public process and in total disregard of 18 years of Massachusetts firearm law, under which firearm retailers operated. The attorney general undermined the state legislature by unilaterally declaring firearms that were legal to be illegal.”

Another issue at work here is that many semi-automatic actions are so similar that they too may be considered “copycat” firearms by the attorney general.

Unfortunately, the attorney general in an anti-gun state has more than enough power to completely disrupt the gun industry. That needs to be dealt with. While I’m not overly familiar with Massachusetts’ assault weapon ban, I can only wonder if the next step will be to argue that those who followed the law and purchased Massachusetts compliant weapons will now be targeted by the attorney general as having illegal firearms. Unless a grandfather clause is worded the right way, those who purchased the weapons might be in some degree of trouble.

Theoretically, at least. I hope not, of course, but it’s another reason why Healy’s actions need to be smacked down and smacked down hard.

She claims that the firearm industry has ignored Massachusetts’ state law for years, but that’s a blatant falsehood. The firearm industry created weapons in a specific effort to comply with state law. Yes, they did the minimum to comply, but that’s still not ignoring the law. They did what they could to meet their customers’ demands and follow the ruling of the legislature. To say otherwise is to border on defamation.

Frankly, Healy needs to get swatted down like a slow-moving fly at a picnic. Hard.

NY AG James: It's Easer To Find Gun Than An Apple In Parts Of State

Milley Details Nancy Pelosi's Attempt to Take Over the Chain-of-Command
Townhall
Not on her watch! Jennifer Rubin isn't about to just sit there and let someone accurately quote Joe Biden's apparent lie about Afghanistan withdrawal
Twitchy
Fed up NBA Players Cleverly Turn Tables on Media When Asked Their Opinions on Getting Vaccinated
Redstate
Insanity Wrap: Jen Psaki Is the Stupidest Person in the World (Or Hopes You Are)
PJ Media