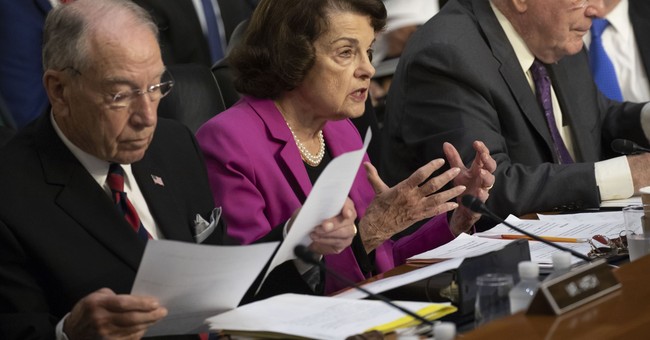 When it comes to guns, Supreme Court nominee Brett Kavanaugh and Sen. Dianne Feinstein are polar opposites. There’s nothing these two are likely to see eye to eye on when it comes to the future of gun control and gun rights.

Feinstein decided, unsurprisingly, to grill Kavanaugh on assault weapons. In particular, his position on Heller 2 where he found that assault weapons were in common usage.

“You’re saying the numbers determine the common use? Common use is an activity; it’s not common storage or possession, it’s use,” Feinstein retorted.

“They’re commonly possessed in the United States, Senator, and they are used and possessed, but the question is are they ‘dangerous and unusual?'”

Kavanaugh goes on to acknowledge that they’re dangerous because all weapons are dangerous but unusual? Hardly.

Frankly, Feinstein is off her rocker if she believes millions of Americans have purchased AR-15 rifles through the years but never shoot them. It takes a high degree of self-delusion even to begin to think something of that sort.

Kavanaugh handled it well enough. He continued to note that Justice Scalia’s decision upheld bans on machine guns–which I disagreed with, but that’s neither here nor there–but Feinstein didn’t want to get into that because she thinks any gun control law passed by Congress is gospel and won’t be repealed by the Supreme Court.

However, Kavanaugh’s description of semiautomatic rifles as being in common use is certainly accurate. While I’m sure no one in Sen. Feinstein’s social circle owns or shoots an AR-15, that doesn’t make them unusual. Pretty much every gun store in America sells them, and sells a lot of them, except in states where they’re illegal. People throughout this great country own them, shoot them, and use them for all kinds of lawful purposes.

In other words, they’re in common use, regardless of what kind of definition Feinstein wants to apply.

Expect her to continue to push Congress to apply her draconian ideas of gun control with her assault weapon ban. It doesn’t matter what Kavanaugh said on the matter.

Well, Brett Kavanaugh isn’t that kind of judge. That’s a good thing, though.

The whole point of judicial review is to check the laws for their constitutionality. It’s not about whether one group or another likes a law or not. That’s irrelevant, as it should be.

The fact of the matter is, Feinstein’s upset because Kavanaugh believes that the phrase “common use” has a meaning that applies to actual numbers sold and fired in the United States.

Honestly, if she doesn’t understand that the numbers sold apply to their use, I’m left wondering how even the people of San Francisco could be so deluded to elect this woman to Congress.