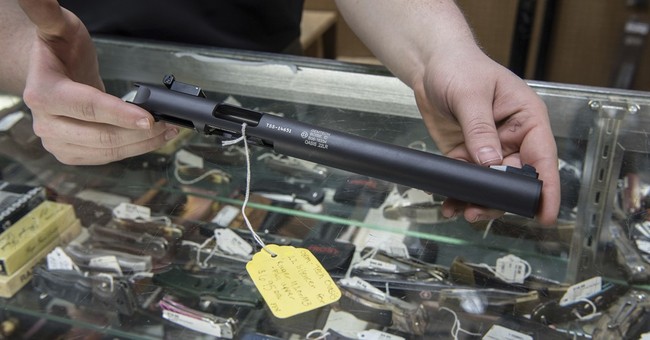 Gun grabbers look at violent crime rates and swear up and down that we need more gun laws. After all, criminals still get their hands on firearms, which means the laws aren’t working.

The reality, however, is much different. The reality is that our current gun laws stop a large number of people from buying guns when they’re not legally permitted to do so. The problem is that despite knowingly breaking the law, few are prosecuted for it.

Few gun buyers are ever prosecuted for lying on forms they are required to complete as part of a background check when purchasing a weapon, a new federal study concludes.

In the 29 states where federal officials handle the background checks, there were only 12 prosecutions in fiscal 2017 of people who were found to have provided false information, such as failing to disclose a felony conviction, according to the Government Accountability Office.

It is a federal crime for people trying to obtain guns to make a false statement or furnish false or misrepresented identification that is intended to deceive people on the legality of the sale of the firearm. Violators face up to 10 years in prison and fines of up to $250,000.

Of a total of 8.6 million transactions processed by federal officials that year, 112,710 were rejected but only about 12,700 were referred for further investigation by the Bureau of Alcohol, Tobacco, Firearms and Explosives.

Now, sometimes, it’s difficult even to know where to look for someone, so I get that.

But when you do find someone or know their identity, few are prosecuted. Then, they try another way to get a gun and get one, only to commit a violent crime that’s then blamed on law-abiding gun owners who already swallowed countless gun laws to curb violence before and watched as it did nothing.

If they’d been prosecuted and convicted, they’d have been in jail, not on the street trying to get a gun from some thug with stolen firearms in the trunk of his car. Sorry, but that’s the sad fact.

Maybe it’s just me, but if you’re not going to prosecute people for this stuff, why does the law even exist in the first place? There are a lot of things out there that should probably be law, but any law on the books should either be taken seriously or repealed. This is a prime example, in my opinion.

Instead, though, we have a law-breaker not being prosecuted at the same time we who follow the law are fighting to protect our Second Amendment rights because of the actions of those who aren’t being prosecuted until someone is either bleeding or dead. Maybe it’s just me, but nothing about this sounds just.

ACLU: Restrict The Second Amendment To Protect The First