As Cartel Violence Continues, The Mexican People Are Arming Up For Self-Defense 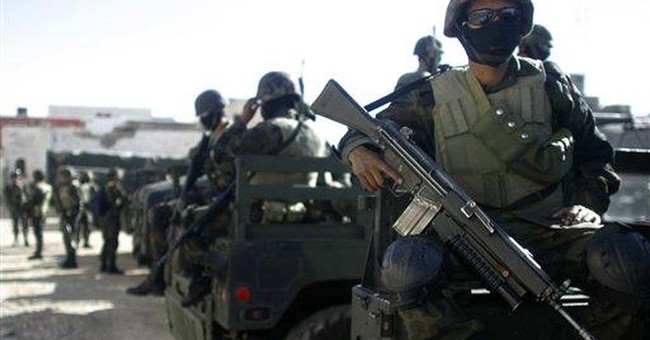 Mexico is the kind of place that you couldn’t pay me to visit. It’s not the third-world squaller or even the dodgy water that would turn me off. No, it’s the cartels and their violence that makes it unlikely I’ll find myself south of the border. While I don’t necessarily consider myself a fearful person, only a fool goes where he knows violence is everywhere.

For some people, though, they don’t have a choice. It’s their home, and they aren’t interested in leaving.

I don’t blame them in the least. They shouldn’t have to.

What these good people are doing, however, is something that’s far more difficult to do in Mexico than here in the United States. They’re arming themselves to protect their homes and families from the cartels.

There were nearly 30,000 homicides last year in Mexico, and the country is on track to surpass that record this year.

Gun control is one way the government is trying to combat the rising murder rate. But as violence soars, more Mexicans are exercising their right to bear arms

Guillermo Azoños, a resident of Mexico City, has decided to buy a gun. He doesn’t live in a dangerous part of the capital, but nevertheless says he’s buying the gun to protect his family.

“I have three, small children and I want them to be protected,” Azoños said.

“The violence in Mexico has grown a lot, and there’s nothing better than having protection inside the home,” he said. “I’m also going to practice with it, in order to know how to use it properly, and be able to defend myself in the future, which we hope will never happen.”

Guillermo bought his weapon in a shop run by the Mexican army, located in the heart of a heavily-guarded military base.

Like the United States, Mexico’s constitution offers its citizens the right to bear arms. Access, though, is another story. While the U.S. has some 67,000 licensed firearms dealer, it’s different in Mexico. A government-operated store just outside Mexico City is the only place where you can legally purchase a gun.

Mexico’s federal gun control statute dates back to 1972. It requires rigorous background checks, long wait-periods, and ultimately, leaves it all up to the government to determine the “cases, conditions, requirements and places,” of the guns which it sells to the public.

Despite all that gun control in Mexico, the cartels are better armed than the government and essentially run several parts of the country. They do what they want when they want, and there’s absolutely nothing anyone seems to be able to do about it. Violence rages and people are starting to realize that the government can’t prevent it.

So they’re arming themselves.

Meanwhile, we have dipsticks in this country who routinely think violence is merely the product of ready access to guns, and that if you can somehow control who buys guns, you can curb the violence.

How did that work out in Mexico?

For the Mexican citizens who don’t have the ability to go to Mexico City and jump through the government’s hoops in order to arm themselves, however, they just get to remain at the mercy of the cartels.

Measure 114 and the placebo effect

Adhering to the Constitution isn't a "homicide pact"

With the 2022 Midterms Over, These Old Stories About Biden Are Resurfacing
Townhall
OUCH! Obama says we all know an 'Uncle Joe' who shouldn't be given serious responsibilities
Twitchy
Martha MacCallum Leaves John Kirby Stuttering Over Differing Treatment of Twitter and Apple
Redstate
Tara Reade Is Ready to Testify Before Congress Against Joe Biden
PJ Media