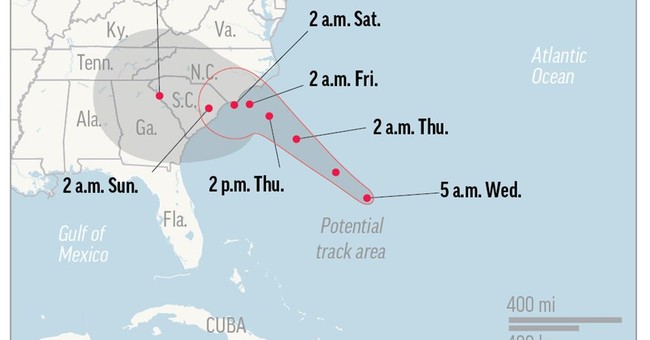 I don’t understand why some communities feel the need to restrict guns in the midst of a hurricane, but they do. I mean, it’s a time when there is virtually no police on the road and when it’s unlikely there will be any crime regardless of the lack of a law enforcement presence. Let’s face it; a hurricane isn’t exactly a lot of fun to be out and about in.

I’ve done it, but no one has ever accused me of exercising good judgment in such instances, for one thing. For another, they were barely hurricane strength when they got here, so it wasn’t as bad as other places.

Most people don’t. But immediately after the hurricane, though, things can be different.

Many are the tales of looting taking place as law enforcement is busy with other matters after the winds start to settle down. And yet, towns like Leland, NC want to try and suspend the Second Amendment during these emergencies.

WILMINGTON, NC & SACRAMENTO, CA (September 11, 2018) — Today, Firearms Policy Coalition and Firearms Policy Foundation announced a pre-litigation demand letter sent today to the Town of Leland, North Carolina, regarding the municipality’s order banning some lawful and constitutionally protected firearm-related conduct in advance of Hurricane Florence. Yesterday, the Town issued an order stating that, “Effective at 9:00 p.m. on Wednesday, September 12, 2018, the transportation or possession, or the sale or purchase of any dangerous weapon or substance, while off one’s own premises, is prohibited.”

The civil rights groups say that the order is unconstitutional. In addition to expressing concerns about the order’s impact on Second Amendment rights, the demand letter characterized the Town’s order as “unconstitutionally vague,” saying that it “sets the stage for arbitrary or discriminatory enforcement since those enforcing the prohibition could apply various and conflicting interpretations.”

“The Town’s prohibition could well increase vulnerability to damage, injury, or loss of life or property, by chilling the otherwise lawful use and possession of firearms and ammunition in the protection of oneself or one’s property during these times – rights expressly preserved under the state law in the event of such states of emergency,” the demand letter argues.

“Leland’s State of Emergency Notice should immediately be amended to strike the offending language creating this unlawful and unconstitutional weapons prohibition. Should the Town fail to do so, and/or attempt to enforce the same against any resident, it stands exposed to civil actions for declaratory and injunctive relief, and monetary damages,” said attorney Raymond DiGuiseppe on behalf of the groups.

To their credit, Leland did amend the language.

Effective at 9:00 p.m. on Wednesday, September 12, 2018, the transportation or possession, or the sale or purchase of dangerous weapons or substances, while off one’s own premises, is prohibited. This prohibition and restriction does not apply to lawfully possessed firearms or ammunition.

However, it still doesn’t explain just why there’s even a mention of firearms. They’re basically saying, “If you’re obeying the law with your guns, you’re good. But if you’re illegally carrying a gun, you’re in double the amount of trouble.” I’m willing to take a stab in the dark and argue that those who are going to possess and carry unlawfully aren’t going to worry too much about what the government is saying at that moment.

I can’t help but wonder if the restriction was intended, then when they faced a pushback and legal action, they pulled the “Oh, no, we didn’t mean it that way” bit.

Regardless, I’m still left wondering why communities try this so often. Do they think it’ll work? Especially at a time when people are more likely to need their guns?