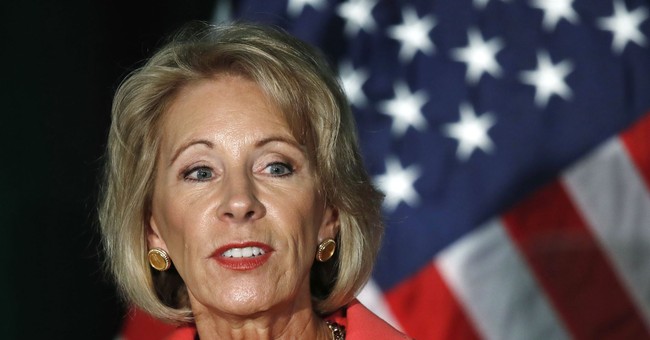 In the wake of the Parkland massacre, everyone was talking about school safety. It makes sense. Parkland was, at that time, just the latest school shooting that rocked the nation. While these kinds of shootings are still statistically rare, they happen often enough that parents and teachers are genuinely concerned.

To that end, President Trump launched a commission to look at school safety.

However, there’s one thing that’s been off the table in the discussions.

The school safety commission convened by President Trump in the wake of this year’s deadly school shooting in Parkland, Fla., will not support new age limits for firearms purchases in its list of recommendations, The Washington Post reported Wednesday.

The Federal Commission on School Safety’s final report will claim age restrictions do not reduce the likelihood of school shootings, two sources familiar with discussions told the Post.

The report, which is set to be released before the end of the year, will recommend that states increase training for gun owners instead.

The White House established the commission after a shooter in Parkland, Fla., killed 17 at Marjory Stoneman Douglas High School and injured 17 others.

President Trump faced backlash over the commission, which was tasked with scrutinizing issues such as mental health, consumption of violent entertainment and media coverage of mass shootings, but not gun control. The commission also looked at boosting security by arming school employees.

But the White House instructed the commission to only consider whether the country should increase age limits for gun purchases.

Honestly, what more could they have done?

But the point remains that their argument that age restrictions do not reduce the likelihood of a school shooting is true. Most school shootings happen with handguns, which are already age restricted. Instead of buying the gun themselves, they either use a straw buyer as the Columbine killers did, or they steal it from an adult as the Santa Fe shooter did.

The age limits didn’t do jack to stop either of these incidents from taking place.

Concerns over school shootings don’t motivate calls for raising the age limits on gun purchases. Don’t get me wrong, some who support increased age limits believe they’d work, but that’s not where the calls come from. Those who initiated the calls likely know better.

No, those calls come from those who are looking for any reason to restrict firearm ownership. The age limit was convenient because of how the Parkland killer got his firearm. That’s it. If he’d gotten it a different way, we’d be having a different conversation. These people just want fewer people being able to buy guns.

So, of course, the commission isn’t pushing for raising the age limit. Not only is the Trump administration powerless to do anything about that–it’s a congressional matter–but it wasn’t anything that would be beneficial in the first place.

Regardless, expect anti-gunners to continue to go nuts over this, because what else do they have working for them?