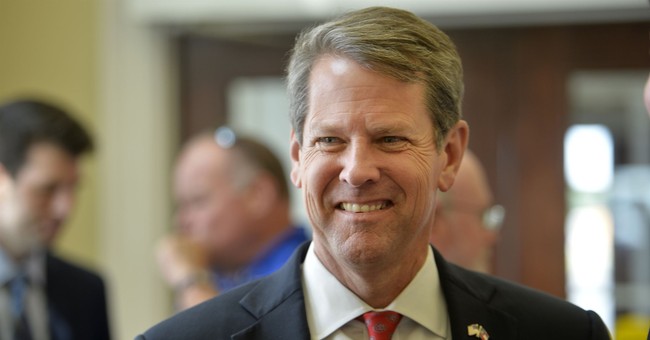 Georgia gubernatorial candidate Brian Kemp may not have enjoyed the NRA’s endorsement during the Republican primary, but that doesn’t mean that he’s anti-gun by a long shot. He made that clear in some recent comments regarding school safety.

Georgia’s Republican gubernatorial candidate Brian Kemp has unveiled a $90 million proposal for school security focused on mental health and local control. But absent from his plan was any mention of the topic that has dominated the national conversation around school safety: guns.

“This is a school safety proposal. This has nothing to do with Second Amendment protections or gun control ideas that my opponent might have,” Kemp said, referring to Democrat Stacey Abrams.

The plan includes funding for a support counselor program in high schools to assist students dealing with issues such as mental health problems, opioid abuse, bullying and violence in the home.

The proposal also calls for a one-time $30,000 infusion for each of Georgia’s 2,292 public schools that local officials can use for “school security purposes” specific to their schools. Kemp also wants to create a new school safety division within the Georgia Department of Education using existing funds from the department.

Too bad that campus carry makes our schools safe.

Kemp is completely accurate. School safety isn’t a gun issue. It shouldn’t be. It’s about prevention and hardening schools, so they’re not targets in the first place. Banning so-called assault rifles or imposing waiting periods doesn’t change that. Most school shootings are carried out by a kid with a stolen handgun, not an AR-15, contrary to what the media might want you to believe.

Trying to enact gun control isn’t going to happen, but even if it did, it wouldn’t solve the problem of school shootings.

By focusing on school safety without infringing on the Second Amendment, Kemp is making it clear that he sees the solutions as making schools a bad choice of target, which is the preventative measure that works for most crime. Don’t believe me? Whose house is most likely to be broken into? The one with burglar bars and a home alarm system, or the one with overgrown bushes to hide behind, no lights outside, and no alarm?

It’s important to remember that the vast majority of school shooters aren’t able to legally purchase guns anyway, so adding further restrictions to firearm purchases won’t make a dent in the problem.

But make it so that schools are too difficult a place to kill a lot of people, and guess what? You end much of the problem.

It won’t eliminate the problem because nothing will. It will, however, minimize it which is about the best you can do until we somehow figure out a cure for violence. Since that’s not likely to happen, how about we harden schools and punish people who had nothing to do with these shootings. In the meantime, Abrams and her people would do well to remember that campus carry puts more good guys with guns on Georgia campuses, thus making them all far, far safer.

Just a hunch, but I don’t the Parkland killer was dissuaded in the least by Marjory Stoneman Douglas High School’s gun free zone status.