When It Comes To Gun Rights, We Don't Care About Nuance 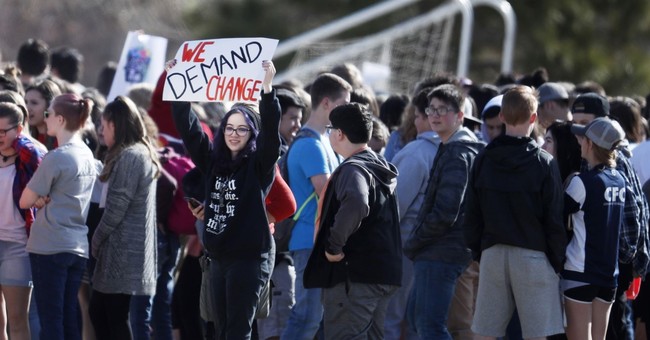 Many gun grabbers have this bizarre opinions about the gun debate. If they’re not convinced we simply don’t feel hard enough, they’re convinced we actually like seeing mass shootings. They seem to go out of their way to misunderstand anything we on this side of the debate have to say.

However, this particular take from the USC student paper was absolutely hysterical.

There’s a lot of derp in this, though I do think it’s well-meaning derp. As a result, though, I’m going to have to fisk this. For anyone unfamiliar with fiskings, it’s a point by point rebuttal. The original post will be in italics while my response will be in bold.

One of the most heated debates in American politics revolves around one sentence in the Constitution: “A well-regulated Militia, being necessary to the security of a free State, the right of the people to keep and bear Arms, shall not be infringed.”

It’s not that hard to comprehend. Regardless of the first half of the sentence clearly reads “the right of the people to keep and bear arms shall not be infringed.” Why is this controversial?

In our politically polarized society, the topic of gun control raises reflexive outcries of “no to guns,” and “guns don’t kill people, people kill people.” The loudest advocates on both sides of this argument are currently manifest in the March for Our Lives movement and National Rifle Association sponsors, though controversy surrounding interpretation of the Second Amendment has perplexed the American public for decades. What’s more, the debate is split between the Democratic Party, which typically advocates for gun control, and the Republican Party, which typically defends unlimited firearm access.

Literally no one in the Republican Party is calling for unlimited firearm access. This is a prime example of a strawman. For example, no GOP official is calling for allowing convicted felons to be armed. They’re not calling for a repeal of background checks or changing the law to allow guns to be shipped to people’s homes.

Instead, the Republicans are generally taking a “preserve the status quo” in most ways, with an expansion of how we can exercise our gun rights through things like national reciprocity. Yet that’s a far crime from “unlimited firearm access.”

However, stances on gun control do not need to be black and white. In fact, there are many interpretations of the Second Amendment that fall between the complete abolition of firearms and the uninhibited right to gun ownership. Political parties and interest groups make the American people think that there are only two polarized sides to the issue, but we should be exposed to the full spectrum of stances and theoretical perspectives.

We don’t care how you interpret it. The text is plain, as I’ve already noted.

Futher, we already know the interpretations. While you were playing with your dolls or trying to keep your boyfriend from checking out the captain of the cheerleading squad’s butt, most of us have been battling these alternate reality versions of the Second Amendment.

The fact that these alternate interpretations exist, however, is irrelevant. Their mere existence doesn’t bestow any validity to them. Especially since the plain text of the Second Amendment says “shall not be infringed.”

One of the main issues with interpreting the Second Amendment is discerning what exactly “a well-regulated militia” refers to. Collective rights theory, a well-recognized legal interpretation, finds that the phrase refers to the importance of a state’s right to military defense, not the individual’s right to own firearms. This perspective explains that the Second Amendment does not give individuals the right to freely possess and use firearms. Collective rights theory is based on the fact that the language in the Second Amendment deems the bearing of arms “necessary to the security of a free state” rather than to the security of a free public.

And this theory was thoroughly destroyed by the Heller decision which found the Second Amendment to be an individual right. Further, the argument was stupid even before then. There’s absolutely no need to protect the government’s right to have arms from the government.

As states do not have their own armies, most people have overlooked this argument, instead interpreting the law to protect individuals’ rights to own firearms. Individual rights theory is the opposite of collective rights theory, stating that “the right of the people to keep and bear arms,” implies that the founding fathers intended for all Americans to be able to own guns. The NRA and anti-gun control advocates base their argument in individual rights theory.

A gross oversimplification of the argument. As noted above, there’s absolutely no reason to assume “the people” means anything other than the citizenry of the United States of America. This isn’t based on theory but on the plain text of the Second Amendment.

In fairness, though, it should be noted that when the Second Amendment was written, states did have their own armies. These were the state militias and they answered to the governor of that state, not the president. If the Second Amendment were to preserve the states’ power to have militias, I can’t help but believe it would have been made far more clearly.

Only 8 percent of American adults believe that “almost everyone” should be able to legally own guns, whereas 9 percent say that nearly no one should, according to a Pew Research study.  Noticeably, most Americans believe that there is a middle ground to the right to gun ownership. The technological advancement of firearms has strongly influenced the public’s view on how unlimited their rights to bear arms should be, with many believing that modern firearms should be held to a different standard than the guns available at the time the Second Amendment’s was written. Guns were lethal weapons in 1776 but could not do nearly as much damage as today’s high-capacity weapons can. Sixty-eight percent of urban and suburban residents believe that high-capacity magazines should be federally banned, according to Pew Research Center.

Few are arguing that “almost everyone” should be armed because that’s generally taken to include people like convicted felons, spousal abusers, drug addicts, and people of that ilk. Few are arguing that these individuals should be permitted to have guns, so a lack of support for a position no one is really espousing proves absolutely nothing.

Further, we don’t submit rights to the court of public opinion. Once upon a time, polls could have been taken that would show support for slavery, segregation, against women’s suffrage, and a whole host of other issues we now thing of human rights. Does public support or opposition determine what is a right and what isn’t? Of course not.

The same is true for the Second Amendment and our right to keep and bear arms. I don’t care about how someone feels about the destructive power of my AR-15. They don’t get a say in how I exercise any of my other rights, so why this one?

The Second Amendment can be interpreted through many lenses: emphasizing states’ rights, with a focus on the individual or with contemporary innovation and design in mind. Before adopting others’ opinions about our constitutional rights, I hope that we can all read and think deeply about the rhetoric itself, listen to a broad range of theories without judgement and, ultimately, critically think about the rights we have as Americans.

I have yet to see any signs that you took your own advice.

I understand that your audience is a bunch of college kids, but let me clue you in on something. The gun rights supporters on USC’s campus? They already know everything you’re saying…and they know it’s complete and total male bovine excrement. They know that the collective rights theory is based on wishful thinking and that it was killed formally by the Supreme Court. They know all this.

All this column is doing is allowing you to pretend you understand both sides of an issue that you did little more than skim a few Wikipedia entries on.

The truth is, there’s no real nuance to the gun control debate. On one hand, you have people who believe it’s a constitutional right to keep and bear arms. On the other, you have jackwagons who want to infringe on that right. Period. They may even say that they want just this one law, but history has shown it’s never that one law. It’s that one law at that moment. Before long, though, they want something else and something else.

But that nuance is missing from this discussion. I wonder why?