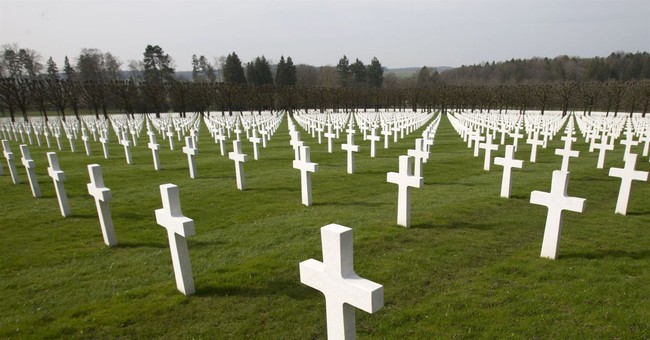 The British people are wonderful in many ways. While they don’t share American politics, let’s never forget that since that last little dust-up we had with them a couple of hundred years ago, they’ve become our staunchest ally. In the wake of 9/11, as many of us raged to fight back against the monsters who had attacked us, the British were ready for that same blood.

But the country is absolutely bonkers when it comes to gun policy. And even knife policy these days. They’re not shaping up to do well with cars, either.

However, England, a country that’s ready to ban everything, has found a line too absurd even for them.

The Silhouettes of world war soldiers, due to be installed in green spaces throughout the country, were snubbed by Brockenhurst Council after they decided that the rifles the Tommies were holding could ‘upset families’.

Instead of the installations, they decided to cover the town’s lampposts in poppies as this would be seen as a less violent alternative.

However, their suggestion caused outrage among residents and they were forced to backtrack on their plans after they were slammed with a petition in favour of the silent soldiers.

Councillor Harry Oram told the Daily Echo that he voted in favour of the soldiers but others were against the statues because they had rifles depicted in them.

This, of course, created a backlash and the council was forced to backtrack, which is good for the residents of this town.

However, let’s also take a look at the mentality that caused this to happen in the first place.

Today, throughout the western world, we have people who have advanced an idea that anything unpleasant is something to not only be avoided but to press the government to suppress. This is how you get riots over speakers on college campuses. It’s also how you get governmental bodies trying to anticipate the potential backlash and banning silhouettes because they depict armed men.

Because British soldiers fought World War I with harsh language and hashtag activism or something.

Luckily, even the British–a people fairly kowtowed into being anti-gun–thought this was ridiculous. Well, at least enough of them in this area, anyway, and that’s for the best.

As a veteran who served during peacetime, I can’t help but believe that any nation that values its freedom should honor the men and women who have risked their lives to defend the nation in times of war. Yes, that includes times when the war may not necessarily seem as such. You honor those people because those who serve during such difficult times represent the very best among us.

Perhaps the good people of Brockenhurst are a sign that the British people still have held onto their good sense, at least to some degree.

It’s only too bad that they’re fighting to protect silhouette guns and not actual firearms they could use to protect themselves, but that ship has long set sail. They have to take back those rights.

Who knows? Maybe they have it in them after all.