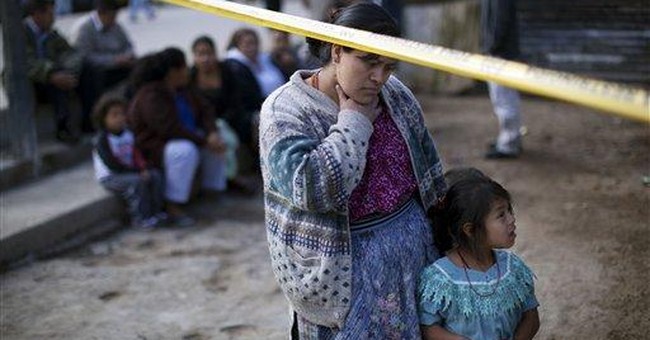 I remember when President Obama first tried to blame Mexican violence from drug cartels on American firearms. It was a feeble attempt, but he gave it a shot anyway. Too bad it blew up in his face so spectacularly when Operation Fast & Furious was revealed. It seemed at least part of the reason why American guns were showing up south of the border was that the ATF pressed gun stores to sell firearms in what were straw buys.

In short order, the media soon found something else to focus on other than whether or not the Obama administration armed the cartels.

Now, two years after the Obama Administration leaving office, the media seems to be trying to relaunch the blame game of trying to pin Mexican cartel violence on American guns.

Among the thousands of immigrants who have been coming across the U.S.-Mexico border in recent months, many are seeking to escape gang and drug violence raging in their homelands. The weapon of choice used to intimidate them? Often an American-made gun.

While the flow of drugs and immigrants into the U.S. has been well-documented for decades and become a regular part of the political debate, what is often overlooked is how gangs and drug cartels exploit weaknesses at the border to smuggle guns from the U.S. into Latin America.

A 2013 report by the University of San Diego says the number of firearms smuggled from the United States was so significant that nearly half of American gun dealers rely on that business to stay afloat. On average, an estimated 253,000 firearms each year are purchased in the United States expressly to be sent to Mexico, the report said, the vast majority of the sales originating in the border states of California, Texas, New Mexico and Arizona.

That claim alone should discredit the report without needing to delve any further. If half of the gun dealers rely on that business to stay afloat, and the vast majority of sales are originating in California, Texas, New Mexico and Arizona, then you would have to find about half the gun dealers in the country in those four states.

While they have their fair share, it’s not nearly half.

Further, it should be noted that California has the strictest gun control laws in the country, yet guns are supposedly still coming into Mexico from that state. Really?

Gun-control groups contend that the U.S. government is essentially exporting gang violence to Latin America with permissive gun laws – which in turn creates an immigration crisis along the border.

“If the Trump administration were serious about wanting to stop refugees from fleeing violence in Latin America and Mexico to come north, they would be doing something about the southward gun trafficking that is fueling a lot of that migration,” said Adam Skaggs, chief counsel with the Giffords Law Center.

Gun-rights activists say the issue is overblown and mischaracterized.

Even if the issue isn’t overblown, however, there are a few things that need to be remembered about the drug war down in Mexico.

First, part of the problem down there is that there’s only one legal gun store, which means law-abiding citizens who wish to purchase a firearm have to not only navigate the mountains of red tape required to buy but also travel to Mexico City to buy the gun. That means there are fewer guns to be used in self-defense by the law-abiding.

Further, Mexico isn’t the origin point for the drugs they funnel into the United States much of the time. Why does that matter? Because if they can import something as illicit as drugs and funnel that into the United States, do you really think they won’t get guns from elsewhere if any American supplier dried up?

Of course, this whole thing sounds like a hell of a reason to strengthen border security, something the media has tried to characterize as racist and xenophobic.

Elon Musk Tweeted a Meme About CNN...Then They Melted Down
Townhall
It's SO ON: Elon Musk calls down the THUNDER on Apple for threatening to remove Twitter from App Store
Twitchy
Apple Threatens to Remove Twitter From Its App Store, Sets up Major Battle
Redstate
The Babylon Bee Publishes a Hysterical Spoof of a College English Course Description. Oh, Wait!
PJ Media