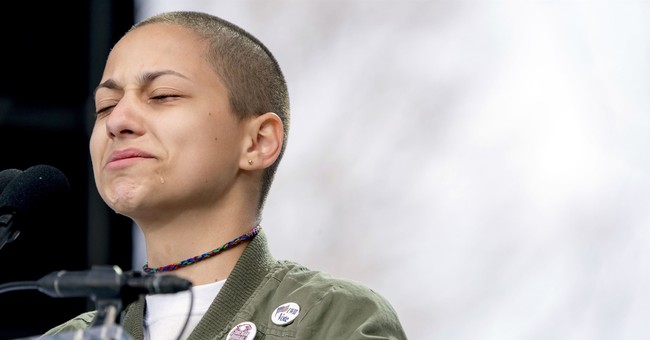 It must be exhausting. The idea that everyone is out to get you is classically thought of as extreme paranoia. However, some people probably do have some grounds to be concerned about their safety. After all, there are those in the world who receive death threats by the dozens. But even one death threat is enough to make anyone concerned.

It doesn’t help when you go out of your way to piss people off, either.

Perhaps that’s why anti-gun activist and Parkland kid Emma Gonzalez decided to admit that she’s terrified someone with a gun sticker on their car will run her off the road.

Parkland, Florida, shooting survivor and gun-control activist Emma González says that she now fears being recognized in public and driven off the road by gun enthusiasts.

A new Vanity Fair profile piece on the 18-year-old activist published Tuesday was promoted by the magazine on social media with a quote about her newfound fame.

“I’m still worried, when I drive down the road and I’m not wearing a hat, that someone with gun stickers on their car is going to recognize me and run me off the road,” she said in an exchange the magazine shared on Twitter.

Emma González: “I’m still worried, when I drive down the road and I’m not wearing a hat, that someone with gun stickers on their car is going to recognize me and run me off the road” https://t.co/TsH2rdhK6Fpic.twitter.com/qnabbMyBbt

The tweet has since been deleted for some reason. My guess is that Gonzalez’s concerns were being mocked rather publicly.

You see, what Gonzalez needs to understand is that there are reasons no one is likely to do any such thing. The first, of course, is that most people don’t pay that much attention to their fellow drivers unless those drivers give them a reason to. In other words, if someone is driving aggressively or stupidly, we’ll look at them. Otherwise, most folks just don’t pay that much attention.

As such, the chances of someone who hates her guts even realizing she’s in the car next to them are slim to none.

However, even if someone does–and let’s be honest, if anyone is likely to notice, it’ll be a gun owner who values situational awareness–she’s not in any danger. You see, we’re not the people who want to silence our opponents. In fact, I will defend Gonzalez’s right to speak her mind with my life if necessary.

It’s not just that I believe that everyone has a right to free speech, but also that I believe that the greatest thing in the world for our side is to hear people like Gonzalez go on about a topic they know next to nothing about as if they’re some kind of expert. It undermines the entire anti-gun movement, yet they keep handing her and David Hogg the microphone.

Every time they spout something from their pie-holes, they alienate another independent. More and more people are seeing that Gonzalez is nothing more than an activist with little grasp on the issue itself and running purely on emotion. She has yet to actually make a valid argument, one requiring even a bit of thought to dispute, yet they keep holding her up as if she’s the anti-gun messiah.

We don’t want to shut her up. We want everyone hearing the nonsense she says.

With that in mind, why would we want to run her off the road?