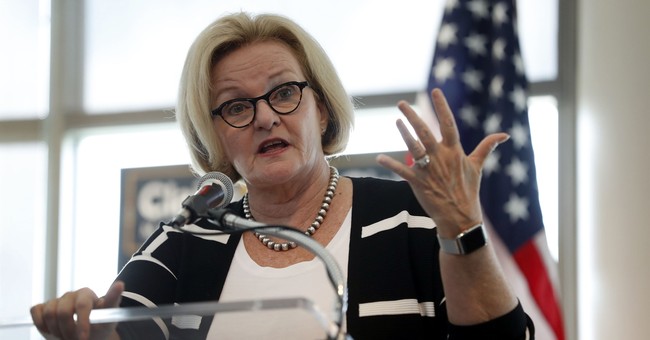 Missouri’s Sen. Claire McCaskill is in a precarious spot. She’s a Democrat elected to statewide office in a state that Donald Trump won by nearly 20 points. As such, McCaskill can’t afford to be seen as too much of a radical leftist. If she is, she’s done.

That’s probably why she was so upset earlier this year when the NRA handed her an “F” grade on her support of gun rights. She can’t afford to be seen as anti-gun as that’s a big no-no in conservative circles.

However, thanks to a Project Veritas investigation, it looks like the only reason McCaskill didn’t get the grade she deserved was that there’s nothing worse than an “F.”

MCCASKILL: “Well if we elect enough Democrats we’ll get some gun safety stuff done. They won’t let us vote on it, we’ve got 60 votes for a number of measures that would help with gun safety, but McConnell won’t let ’em come to the floor.”

MCCASKILL: “Universal background checks, all of that… But if we have the kind of year I think we might have I think we could actually be in a position to get votes on this stuff on the floor and we’d get 60 [votes]…”

JOURNALIST: “So you would be on board with the bump stocks and… high capacity mags.”

MCCASKILL: “Of course! Of course!”

Despite her strong views on gun control, Senator McCaskill does not tend to promote them on the campaign trail or on her website. Rob Mills, who works on Senator McCaskill’s campaign, says that is “…because she has a bunch of Republican voters.”

Another individual who works on Senator McCaskill campaign, Carson Pope, adds that “…a semi-automatic rifle ban is more so what she would support.”

According to Mills, Senator McCaskill conceals her support of Moms Demand Action, a gun control group, and other similar organizations because they would “…hurt her ability to get elected.”

MILLS: “But she doesn’t openly go out and support groups like ‘Mom’s Demand Action’ or just like other groups that are related to that. Because that could hurt, her ability to get elected. Because people like see that and they’re like well I don’t want to support her even though they stand for the same policies…”

MILLS: “She’s worked out stuff with Mom’s Demand Action to make sure that she can support their goals without supporting the organization openly. And you know, Mom’s Demand Action does the exact same thing. Like a lot of our volunteers are actually from there. She’s really good about strategy and making sure she has a goal and can get there.”

In other words, McCaskill is trying to play the people of Missouri for suckers, especially when it comes to guns.

McCaskill can argue that her NRA grade is too low, but her people are suggesting that it’s just as warranted as Dianne Feinstein’s grade. She’s a gun grabber, plain and simple. She supports bump stock bans, high-capacity magazine bans, and a ban on semi-automatic rifles. Keep in mind that the AR-15 and the AK-47 are far from the only semi-automatic rifles on the market. It doesn’t matter to her. She wants to ban them.

Well, the voters of Missouri can see all of that now. If they elect her to another term, then they almost deserve what happens next.

The problem is, McCaskill is a U.S. Senator. The rest of us will feel the pain if Missouri sends her back to Congress. All we can do is make sure to elect enough pro-gun candidates that McCaskill’s radical agenda never sees the light of day.

But it’s far better if she’s sitting at home while Congress is in session from now on.