Crimea School Shooting Proves, Once Again, That It's Not Just The U.S. 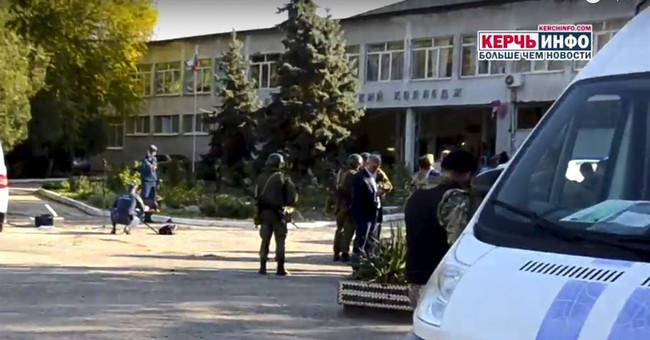 Anti-gunners claim that school shootings are a uniquely American problem. They’re not implying it, either. They’ve used that precise phrasing more than once as they start down their road to arguing for tighter gun control. After all, they argue, the rest of the world has strict gun control and a lack of mass shootings, so if we get tighter firearm regulations, we wouldn’t have mass shootings either.

Unfortunately for them, the entire premise falls flat on its face because, contrary to their most fervent wishes, it’s not just an American problem.

Russian officials said an 18-year-old student attacked his vocational school Wednesday in Crimea, going on a rampage that killed 17 students and left more than 40 people wounded before killing himself. One student said the shooting went on for at least 15 minutes.

Russia’s Investigative Committee, the nation’s top investigative agency, said the attacker was caught on security cameras entering Kerch Polytechnic College in the Black Sea city of Kerch and firing at students. It identified him as [name redacted].

Sergei Aksyonov, the regional leader in Crimea, said the fourth-year student at the school had acted alone and killed himself in the school’s library after the attack.

The committee said all the victims died of gunshot wounds.

The statements came after hours of rapidly shifting explanations by Russian officials as to what exactly happened at the school. Officials at first reported a gas explosion, then said an explosive device had ripped through the college canteen during lunchtime in a suspected terrorist attack. Witnesses, however, reported that victims were being killed by a gunman or gunmen.

Reflecting the official confusion, Russian President Vladimir Putin said the victims were killed by an explosion just as the Investigative Committee was announcing they were fatally shot.

Russian news media showed a security camera image of the suspect wearing white T-shirt walking down the school’s stairs with a shotgun.

Russian television said [the killer’s] mother, a nurse at a local hospital, was helping the wounded, unaware that her son was the suspected attacker. It quoted those who knew Roslyakov as saying he was not very sociable and often put gloomy posts on his social media page.

For the record, Parkland resulted in 17 people dead and 17 wounded, making this a worse attack so far in scope. Especially since it now looks like the death toll is more like 19 people.

It also happened in a country where the average citizen can’t get an AR-15, yet just as many people were killed as Parkland, and in this case, it looks like the killer used a shotgun.

The problem with mass shootings isn’t that people have access to firearms or not. Clearly.

The real problem is that some people are so completely broken inside that this looks like a viable plan for whatever reason. They’re messed up and somehow think that the path forward should be littered with dead bodies. No one seems to understand it.

While the battle rages on with regard to gun control, maybe we could start trying to delve into something we should all be able to agree with and start looking at what makes these people want to murder scores of other people? If we can find why people end up this way, maybe we can start to do something to prevent stuff like this from happening without undermining the Second Amendment rights of ordinary Americans.

After all, this isn’t a uniquely American problem. After this, only a fool would continue to argue it is.

Target: Musk
Townhall
Lib 'polling/targeting expert' gets a lesson on why couples go to the grocery store together
Twitchy
New CBS Poll Is 'Damning Indictment of Biden' While Official Offers up a Feeble Response
Redstate
APPALLING: Teen Girl Disappears at NBA Game and Turns Up 11 Days Later in Nude Photos on Sex Trafficking Site
PJ Media