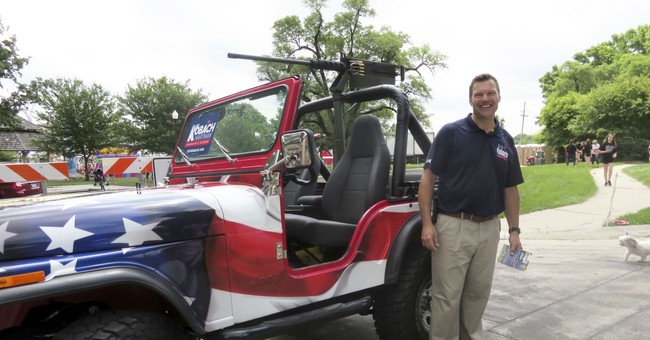 For gun people, the presence of a firearm or firearm-shaped item isn’t an object of concern. If I see a gun out in public, I may take a good long look, but it’s because I’m checking out what the other party has and how they’re carrying it. I’m definitely not freaking out about it.

Well, unless it’s something really cool, then I may geek out.

But when Kansas gubernatorial candidate Kris Kobach mounted a replica M2 machinegun on a Jeep, it was more than enough to make anti-gunners apoplectic. They seriously lost their stuff.

Eventually, the use of the replica gun was banned. Then it wasn’t.

Over at America’s First Freedom, they bring up an excellent point about the whole mess.

“Living in one of Kansas’ areas where there is a high population of gun enthusiasts who are avid Second Amendment supporters, one has to think that maybe this is more than just about a replica [gun],” Crossland-Macha told Breitbart News in a statement. “It just saddens me.”

After much outcry, the committee reconsidered its decision and decided to allow Kobach and his fake gun.

Why is it that the Hollywood elites can make millions off films that glorify killing and rely on gun play as ways to drive the plot forward—even if it is in excess, but a political candidate whose philosophy is based on preserving those things that this country was built on can’t demonstrate such a belief?

I love action movies as much as the next guy. Frankly, most of the movies I have on my “must watch” list involve weapons in some way, shape, or form. It’s just what I love to watch. Like most Americans, apparently.

Yet Hollywood elites often demonize guns in their daily lives, then immediately pick up a firearm in a movie and not only do they not recognize their hypocrisy, they outright reject its existence. Take the Left’s defense of Jamie Lee Curtis, for a moment. Fox News calls out her hypocrisy in using a gun in the new Halloween movie while advocating for gun control, and they lose their minds. “Don’t they know she’s just playing a character?” they argue.

Well, yeah, we all do. We also know that Curtis chose to play that role. She decided to pick up that firearm for the movie, something that she and her ilk are working toward making impossible for the average American.

In Kansas, the idea of a replica gun was too much for these people, but they’ll still flood movie theaters to watch real guns being used in myriad violent ways and never once wonder how that is somehow better than a gun-shaped object being displayed in a parade.

Of course, it’s not like intellectual consistency is a hallmark of the anti-gunners. This is especially true of the Hollywood variety which makes fortunes with a gun in their hands while spending much of that fortune supporting politicians and policies that would keep guns out of our hands.

That is their right. It’s a free country, after all, so they can do just that.

But they don’t get to pretend they’re anything but hypocrites, much like the legions of anti-gunners who fill movie theaters for action movies.

DOJ doubles down on claim that medical marijuana patients are too dangerous to carry guns
Sep 23, 2022