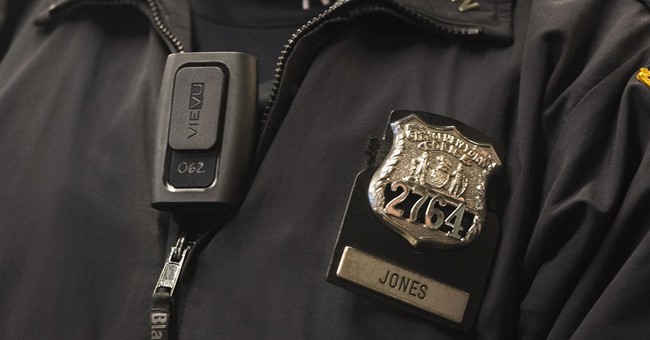 Police-issued body cameras may have caused some officers to be concerned when the issue first popped up, but we’ve seen numerous examples of body camera footage exonerating officers when they were accused of various offenses.

In other words, at least to this outsider, body cameras have been great for police officers.

But I think we can all agree that if they’re going to explode, their usefulness is severely limited.

There were no injuries in the incident.

An on-duty officer noticed smoke from his body camera device while on a midnight tour Sunday, according to police. The officer quickly removed the device as smoke exited the bottom portal.

“Nothing is more important than the safety of our officers, and equipping the NYPD with the best equipment is a paramount priority. … The incident revealed a potential for the battery inside the camera to ignite,” the NYPD said in a statement. “The cause and scope of the defect are currently being investigated.”

This only really impacts one particular model of camera, the VIEVU model LE-5. The NYPD uses other models as well, and those are still in operation on the streets of New York right now.

At this point, it’s too early to say if it’s a fault across all models or just with this one unit. Of course, that’s why they’re investigating.

If it seems to be an isolated incident, they’ll likely go back to using the LE-5 models.

However, despite what some mainstream news outlets are claiming, the term “recall” is a little premature. That said, if it turns out to be a design flaw in the LE-5s, a recall would likely be forthcoming.

Body cameras have shown time and time again how professional most of our police officers are when interacting with the public. It’s shown officers to be in the right in numerous officer-involved shootings, incidents which might well have sparked more protests against supposed police brutality, and has even cleared officers accused of sexual assault. So, yeah, they’re good things.

But not if they’re going to explode.

Luckily, no one was injured in the incident, but it’s definitely time to launch an investigation. Is the NYPD overreacting a little to a single incident? Well, I can see that argument, but I disagree with it. This could have been a serious problem and could’ve caused some serious injuries to the officer in question. By pulling these devices–something they can do since they have an older generation still in the field–allows them to keep officers safe from the equipment malfunction.

All in all, this is the right move.

Let’s hope it was an isolated incident and that we don’t see more of these kinds of things happening. I’m sure officers don’t like wearing yet another piece of equipment, after all, and I’d hate to see them have yet another reason to leave something like this behind, especially when it’s done so much to clear officers of alleged wrongdoing.

GOP Congressman Asks Fauci THE Question That's on Everyone's Mind Right Now
Townhall
People are noticing something about the latest Pew poll showing Biden at nearly 60 percent approval
Twitchy
Ontario Announces Virus Restrictions That Cause Such a Huge Backlash, Even Police Won't Enforce Them
Redstate
You Will Not Believe the INSANE Proposals This City Is Considering for 'Reimagining' Public Safety
PJ Media