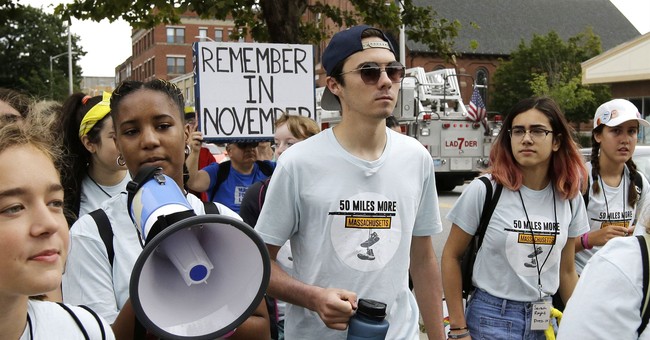 Anti-gun activism spiked in the aftermath of Parkland, which is to be expected. When 17 teachers and kids are killed, everyone wants answers after all. Yet when the media is constantly bombarding people with anti-gun messages, they’re going to think that gun control is the only viable alternative. Again, it’s to be expected.

However, anyone who followed the gun control debate before February 14, 2018, would know the pattern these things take. You have outrage in the immediate aftermath, followed by the time when lawmakers make a ton of anti-gun proposals of which almost none have anything to do with what happened, and then people come to their freaking senses and realize that this is stupid.

Too bad no one told these Parkland parents about that.

The urgency was understandable, and the pain was palatable: A teen gunman killed 17 people were killed wounded another 17 people in the incident in South Florida last February.

Parents of the students launched a political action committee, with the hope of making a significant impact in the upcoming mid-term elections.

Fast-forward to the reality of late October, 2018: Disappointing fund-raising goals has forced the group to scale back its plans significantly.

“None of us had a grasp of how difficult this would be,” Matt Gohd, the group’s California-based executive director, told the Miami Herald. “We needed more resources, more people.”

But it just hasn’t happened.

In other words, no one told them it wouldn’t be easy, and now they’ve found out the hard way.

What happened here is that they thought their status as parents of Parkland would open up the doors, money would flow, and no one would dare oppose them because who could be so crass? Then they get going with things and learn that it’s a lot harder than that. They learn that we’re not inclined to roll over because something horrific happened to their kids, especially with what we now know about the local government failures that led up to the shooting.

So now they’ve learned otherwise, and they’re reaching out to the media so they can get the word out.

All I can do is chuckle.

After all, they basically delved into this activism feet-first with no real knowledge of the landscape involved, then they get upset that they aren’t able to raise $10 million right out of the gate. Yes, you read that number right. That’s the number these folks gave the Orlando Sentinel. They thought they’d be able to raise that kind of money with no name, no connections, and no credentials other than where their kids went to school.

What’s worse? No one in the gun control movement convinced them they’d be better served by working with an existing gun control group, either at the state or national level.

Nope. They went to do their own thing, something none of them had any experience doing before and thought they could be the difference-maker in the 2018 elections.

For me, all I can do is sit over here and laugh my rear off. This is a big chunk of how we keep winning.