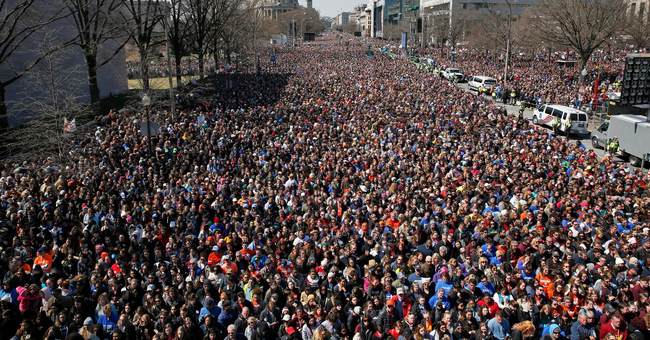 One thing Parkland did was mobilize the youth of this country far more than anything else in recent memory. High school students, normally pretty docile if not oblivious to the world around them, embraced gun control as a cause and started flapping their gums on a topic they knew nothing about.

Still, engagement in the political process is good, right?

Well, it can be. However, it helps if you know what the hell you’re talking about. However, like their progressive allies, these students don’t understand what rights are.

Over the weekend a group of around 100 teens convened in our nation’s capital to ratify a Students’ Bill of Rights for School Safety.

The resulting 15-point plan contains a laundry list of mandates, everything from ensuring access to safe spaces to “recognizing systemic and institutional oppressions” to regulating modern sporting rifles under the National Firearms Act.

Among the attendees was Parkland survivor Jack McLeod. He spoke with The74Million.org about the need “to do something” in the wake of the February tragedy at Marjory Stoneman Douglas High School that left 17 dead and 17 others wounded.

“When you experience gun violence, there’s a certain obligation within you, I think, to do something,” said McLeod.

None of these are rights. They’re not even remotely connected to rights. This is a glorified list of demands, a platform with which they can judge candidates.

Now, in and of itself, that’s fine. Plenty of groups trot out platforms like this on any number of topics and plenty of individuals use them to see whether a candidate is strong on that given topic.

Or, we mock them. That happens too.

In this case, though, calling this a Student Bill of Rights is an insult to the very concept of rights, something which you have by the very nature of your existence. Rights don’t cease to exist because someone doesn’t like them. For example, Europeans have the same right to own a gun we have. The difference is their government has blocked them almost completely from exercising that right.

None of this, however, is remotely a right. Seriously, how can you think that putting the AR-15 on the NFA list is a right? Rights exist regardless of the technology available, so not just is the idea idiotic, but it also isn’t a freaking right.

Seriously, every one of these kids needs to go home, find their government teacher, and demand a refund for the tax dollars wasted trying to educate them on the topic. Not a single one of these approaches the realm of a legitimate right.

As for the list itself, if we divest it of its nomenclature, is nothing more than the typical progressive grabbag of anti-gun nonsense. It’s stuff they’ve been demanding for years and years, despite the fact that the places which have it are no safer really than the places that don’t. In many cases, it’s the opposite.

But, good luck with your “rights.”