What Will Happen If The Blue Wave Doesn't Come? 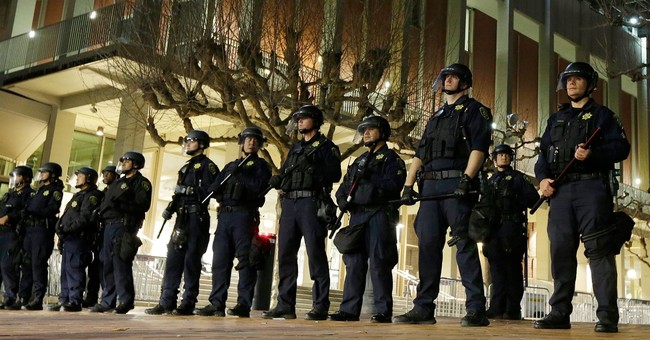 For some time, the left has been predicting a “blue wave” come November. While some experts are trying to walk back those predictions now, it doesn’t change the fact that many street-level “activists” have it in their head that their side is going to win, impeach President Trump, and bring about a new age of peace, love, and totalitarianism.

But what happens if that doesn’t happen?

Well, history has shown us that this particular brand of progressive isn’t known for meekly accepting the result of elections. There have been more riots in the last two years in this country than in the previous 20, or at least it seems that way, and most of them have stemmed from people being upset that Donald Trump not only had the audacity to exist but also become president.

We have little evidence to indicate that there won’t be more of the same if the midterms shake out to be a disappointment for the far-left. In fact, there’s some talk on the internet that it will happen.

For what it’s worth, Greg Ellifritz over at Active Response Training has some tips for what to do if you find yourself caught in a riot.

I’ve read some articles by various “tactical gurus” advising that if people get caught up in a riot or confronted by looters, they should start cutting throats and shooting everyone in the face with their 9mm pistols to facilitate escape. There’s certainly a time and place for such actions, but if you are smart, it will never come down to that. Let me share some of my experiences.

In addition to having dealt with some pretty unruly crowds at work, I’ve been caught up in a few riots during my third world travels. In Brazil, I was tear gassed by the police because I was in the middle of a huge fight and riot that broke out after a 600,000 person concert on the beach. In Peru I was even stuck in a riot where one of the rioters (a striking transportation worker) was shot by the military. There were others as well. I’ve seen some pretty crazy crowds.

In each one of those bad spots, it was relatively easy to escape without having to resort to using violence myself. If a person uses some common sense and keeps a good situational awareness, he or she can usually get away from most riots or protests before things get too bad.

The first piece of advice I can give you is to pay attention to your surroundings and have an escape plan everywhere you go. When you see things starting to go bad (massing police, masked looters, violent behavior, or people setting fires) GET OUT!  Implement your escape plan. Don’t stick around and become a target for police batons, gangs of teen looters, or panicked crowds. Usually the people who get hurt or killed in these events are the people who aren’t paying attention or who want to stand around and be a spectator.

If, despite your best efforts to avoid problem areas, you find yourself surrounded by a  mob or overtaken by a riot, quickly get your back to a wall. That way you won’t be surrounded and will only have to deal with a few people at a time.  I’ve found this tactic works very well. If you fade back to a wall and stop moving, often the crowd will ignore you and pass right by.

Sure, there’s something to be said about shooting your way out if you have to do that, most people would probably rather not take a life if they don’t have to.

Of course, also be armed at all times if possible. While avoiding the riot is ideal and letting it pass you by is acceptable, that may not be an option, and you need to do what you have to to keep you and your family safe and sound.

Now, with all that said, how likely are riots? I’m inclined to say they’re pretty likely regardless of the outcome. Any GOP win will be described as the result of Russian manipulation, and any Democratic win will automatically be hailed as the true voice of the people.

It’s also possible that a couple of wins for Democrats in the right places–such as the Florida governor’s race, where the Democrat holds a strong lead over his opponent–might be enough to stave off the destruction for a time. Instead, what wins there are will be spun as evidence that the tide is turning against President Trump and that it’s a huge victory for the left.

But don’t count on it.

Like in everything, hope for the best and prepare for the worst. That’s the only reasonable course in an increasingly unreasonable world.