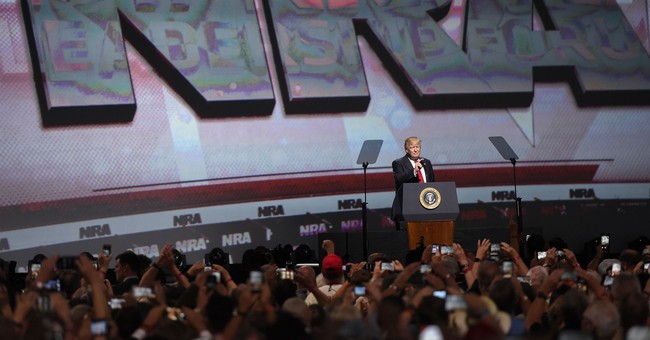 Throughout the nation, the Friends of NRA groups hold banquets to raise money for the NRA’s charitable arms. This goes toward grants and education, not lobbying.

However, this distinction isn’t sufficient for some people who are triggered by those three letters in that particular order.

At least, that seems to be why they’d protest a fundraiser.

At a National Rifle Association fundraiser in New Hyde Park in September, several shotguns, rifles, buck knives and pistols were raffled off. Among the prizes was the 2018 Friends of NRA Gun of the Year set: a silver stag knife, a limited edition handgun engraved with the words “Defending Freedom” and a display case.

All proceeds from the Nassau County Friends of NRA banquet went to the NRA Foundation, the organization’s charitable arm, which helps fund shooting ranges, gun safety classes and other community programs. The fundraiser was held at the Inn at New Hyde Park on Sept. 27. This year, during a time of increased debate over gun control, the event drew protests of the venue and elected leaders’ criticism.

“At the end of the day, there’s still a message that they’re sending by raffling off a firearm during their fundraiser,” said Assemblywoman Michaelle Solages, a Democrat from Elmont who attended a Sept. 16 protest outside the Inn.

Letitia James, New York City Public Advocate and Democratic nominee for attorney general, hosted a Gun Violence Roundtable in Mineola the morning of the fundraiser in reaction to the event. James said that she made “no distinction” between the lobbying and charitable arms of the NRA. “NRA is an organization that needs to be held accountable for the destruction and the loss of lives that it is impacting here on Long Island and all across our nation,” James said.

Nassau Friends of NRA Treasurer Bryan Pemberton, of Glen Cove, took issue with Solages’ judgment of the raffle. “These guys can cry … moan, whatever they want to do. It’s no different than going through a licensed dealer,” Pemberton said. All of the prizes at the fundraiser were handled and distributed by personnel from Camp-Site Sport Shop Inc. of Huntington, a licensed gun store. In order to collect any firearms, recipients had to pass a background check and possess the correct license for the firearm. Pemberton said that winners have been denied in the past.

Pemberton is precisely right. Just because you win a raffle doesn’t mean you’re going to walk out with a gun just because. They still have to go through a background check before taking possession of the firearm. It’s not like this is going to put guns into the hands of criminals.

But, then again, the anti-gun crowd is completely convinced that no one wants a gun except for nefarious purposes, so of course, they’re going to freak out at the idea of raffling off a lawful product to law-abiding citizens. It’s what they do.

This is part of the effort to stigmatize gun owners. They want to choke off their support network, make it impossible for the NRA to do anything without criticism, then isolate people so they feel alone. The idea is that people who feel alone will eventually change their positions so they can be part of the crowd.

So they’re going to demonize the NRA despite the organization doing absolutely nothing wrong.

We just need to call them on their crap when they try it.