What All Happened In Pittsburgh Synagogue Shooting? 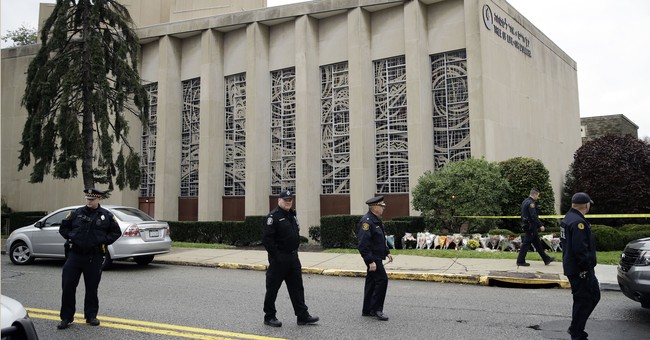 Over the weekend, as if there hadn’t been enough crap going down over the last week, a man reportedly walked into a Pittsburgh Synagogue and started shooting. The Tree of Life Synagogue played host to unimaginable carnage as at least 11 people were killed and four police officers responding to the incident were wounded.

In a rampage described as among the deadliest against the Jewish community in the United States, the assailant stormed into the Tree of Life Congregation, where worshipers had gathered in separate rooms to celebrate their faith, and shot indiscriminately into the crowd, shattering what had otherwise been a peaceful morning.

The assailant, identified by law enforcement officials as [Redacted], fired for several minutes and was leaving the synagogue when officers, dressed in tactical gear and armed with rifles, met him at the door. According to the police, [Redacted] exchanged gunfire with officers before retreating back inside and barricading himself inside a third-floor room. He eventually surrendered.

[The alleged killer], 46, was injured by gunfire, although the authorities said it was unclear whether those wounds were self-inflicted or whether the police had shot him. He was in stable condition Saturday at the University of Pittsburgh Medical Center.

Federal officials charged [him] with 29 criminal counts. They included obstructing the free exercise of religious beliefs — a hate crime — and using a firearm to commit murder. He also faces state charges, including 11 counts of criminal homicide, six counts of aggravated assault and 13 counts of ethnic intimidation.

The authorities said that he had no previous criminal history.

The killer reportedly entered the synagogue and yelled, “Kill all Jews” before opening fire, hence the authorities’ decision to call this shooting a hate crime. This crime is a prime example of one.

One key thing we know about the gunman is that supposedly, unlike the alleged bomber earlier in the week, this guy was not a fan of President Trump. Instead, he reportedly believed Trump was a globalist and was being controlled by the Jews. In other words, this guy was a grade-A anti-semite who finally took his hate way too far.

Sadly, 11 people are now dead, and others are wounded.

The least surprising thing is that this has led to renewed calls for gun control as anti-gunners seize on the moment and use the corpses of the slain as their soapbox.

There were armed guards at Columbine, Virginia Tech, Pulse, the high schools in Parkland and Santa Fe, and on and on. A deranged civilian with an AR-15 and a death wish will always overpower security guards. The @NRA wants us to continue escalating this arms race.

And it should be noted that armed guards helped end Santa Fe, in particular, well before it got as bad as it could have. The same could have been true of Parkland if the school resource officer hadn’t waited outside. Virginia Tech had a police department, sure, but there were no guards on the building where that shooting took place, meaning they had to respond. Columbine also did have armed guards who reportedly saved a lot of lives with their response.

In other words, guards do work. They may not prevent an attack, but they can damn sure minimize it.

But there were no guards in Pittsburgh.

Now, we will dig in and fight this renewed debate all over again. We’ll deal with think pieces that supposedly lay down the reality without a clue in the world of what they’re talking about. We’ll have to refight gun control in Congress and state legislatures all over the country.

All of that pales to the fact that 11 people are dead. It would be a welcome change if we could afford to mourn as a nation for once.