An Open Letter To Piers Morgan 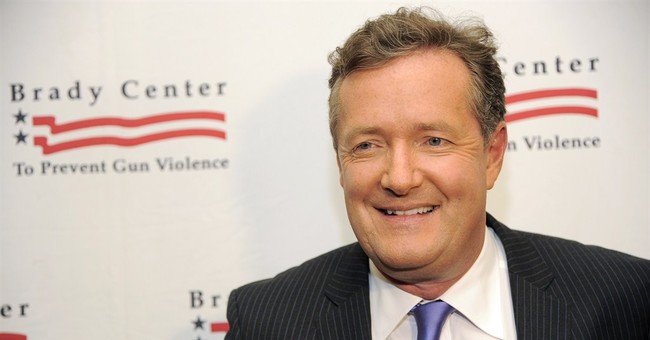 Piers Morgan can probably be excused for being anti-gun. After all, he’s not American. He’s a British subject, which means he didn’t grow up in the Land of the Free and the Home of the Brave.

However, what he can’t be excused for is continuing to interject himself into the gun debate despite all that. The latest example of his efforts is a simple tweet. It’s enough that I feel like I need to respond, not just for me but for all of us.

Dear America,
I know this is a crazy idea from an ignorant foreigner – but why don't you just TRY giving up some of your guns, to see what happens?
Start with the AR-15, which is now used in almost every mass shooting. Make it more difficult, not easier, for lunatics to murder. pic.twitter.com/m49n7s8f2U

To answer your question in the above tweet, about why we don’t just TRY giving up some of our guns to see what happens, I’m afraid that my answer, as an American, is “no.”

The reasons are many, but I’ll touch on a few of them.

For one thing, we’ve tried it. The National Firearms Act of 1934 put heavy restrictions on a number of firearms, basically making it very difficult to obtain certain guns, including machine guns. Guess what happened? Not much of anything. Criminals continued to get the machine guns despite lawmakers’ best efforts.

Then we had the Gun Control Act of 1964 which made it more difficult for people to get guns. It didn’t stop the criminals, mind you, just the law-abiding citizens who jumped through the hoops.

Do you know what we found? We found that when we started to liberalize gun laws, crime actually went down. Now, that’s a correlation and correlation doesn’t equal causation, but if more guns led to more crime, the correlation would have gone the other way. It didn’t. In fact, despite the current anti-gun hysteria, crime rates continue to trend downward.

That alone would have been enough grounds to disagree with you.

However, there’s yet another one, one that I’m sure that you won’t understand as a British subject. After all, many Americans don’t get it either, and that’s how we don’t give up rights because they’re unpleasant or inconvenient. I know that the UK prosecuted a guy for teaching a pug to make a Hitler salute. You guys aren’t huge on rights over there, and a lot of Americans aren’t either, I’m afraid.

But for a lot of us, we jealously guard our rights, especially the right to keep and bear arms. Many of us, myself included, wouldn’t be remotely interested in giving up even some of our guns even if you could demonstrate hard proof that doing so would reduce all crime, not just mass shootings. It’s not because we’re immune to the sorrow people feel after such atrocities, but because we recognize that even if we banned AR-15s outright, there would still be mass shootings. Santa Fe High School should be ample proof of that.

So no, I don’t think we’re going to give up some of our guns.

You have every right to disagree with that, but we don’t care. We’re not subjects, people who forfeit their rights at the whim of Parliment. We’re Americans with rights enshrined and protected in the Constitution.

If you don’t like it, that’s fine, but do consider just going the hell away. We fought an entire war to make it clear that England had no say in American politics, so we don’t really care about your thoughts on the subject.

These Are the Republicans Who Voted to Confirm Merrick Garland
Townhall
Rep. Pramila Jayapal marks eighth anniversary of Michael Brown's 'murder' by police
Twitchy
Trump Attorneys Spill the Beans on Issues With FBI Raid, Warrant
Redstate
We've Got the Deep State on the Run. Here's What Needs to Happen Next.
PJ Media